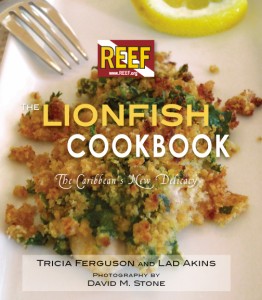 REEF recently released the Lionfish Cookbook.  All proceeds of the sale go to the organization’s Invasive Lionfish Program. The cookbook is co-authored by Lad Akins, Reef’s Director of Special Projects and Chef Tricia Ferguson with photos by photographer David Stone. Joanne Kidd designed the book and did the graphic layout work.
We collect cookbooks; some because we love to bake and some because the foodie in us can’t resist. The BlennyWatcher took particular interest in this project because good friend Joanne gave us sneak peeks of her progress as she played with color and design elements and page formats. It takes a special eye to transform a chef’s recipes and vision into a pleasing design with shelf appeal and we think Joanne really hit the mark. 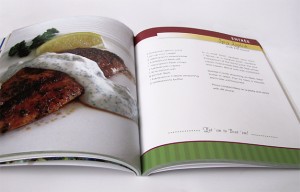 There was a lot of press about the cookbook when it was released and we are aware that it is not likely that this invasive species will be eradicated, but with all due respect to those who don’t want to see any fish killed, the lionfish does not belong in the Western Atlantic. Even if you don’t want to eat a lionfish, you can learn about the invasion and its impact from the beginning chapter of the book. Purchase it from the REEF Store.