A few months ago Ned and I spent a week hanging out with Denise and Ken Nedimyer, founders of the Coral Restoration Foundation, based in Key Largo (you can read a short article and watch the video we made in 2008 after a visit to their coral garden in the Florida Keys), Their coral surveying trip to Bonaire coincided with our annual stay at Buddy Dive, so for a few days our morning coffee discussions switched from fish to coral. Denise and Ken were keen to cover as much of the accessible shoreline as possible to look for Acropora cervicornis (Staghorn coral) and Acropora palmata (Elkhorn coral). Susan Porter (Bonaire Shore Diving Made Easy) volunteered to show us some known stands of the week’s target species at one of her favorite sites, a seldom visited area off Bonaire’s southern tip.

Bonaire’s inshore branching corals have taken a beating. Whether to blame it on two major storms (no question, Lenny in 1999 and Omar in 2008 were devastating), overfishing of predators (one theory says this allows damselfish to flourish and cultivate coral-smothering algae), poor water quality or coastal over-development, there is no doubt the popular dive sites have very little of it left. Before we left the apartment, Susan and I queried Ken about some odd looking white “knobs” that we saw all over a small stand of A. cervicornis during a previous dive. “Damselfish bites,” he replied. At first we weren’t convinced, but as he continued to describe the little white volcano shaped knobs, with tufts of algae protruding from the center, I recalled the damselfish that kept lunging at me as I tried to get a close-up shot of the curious forms.

The water at our site was rough; we were glad we decided to forgo scuba and just snorkel over the shallows. Video shot while bobbing around in 3-4 foot seas would be useless, so I left my heavy video rig back at the resort but took my little GoPro camera – just in case. I tried to keep up with the group, but got distracted by a huge school of rainbow parrots, a fish that is fairly uncommon, at least as a school, on the sites we usually dive. Denise popped up next to me with a handful of tiny snails that she had picked off the Acropora. “These,” she explained, “are another threat to the coral.” Then, “Look, there’s a hybrid.” Acropora prolifera, originally described as a distinct species in 1816, was found in 2002 to actually be a genetic hybrid of A. cervicornis and A. palmata. The hybrid will assume the shape; more branching or more palmate, depending upon which parent species contributed the egg. It seemed that here, there were more hybrid colonies than parents, but I leave that determination to an official survey. I have wanted to see this coral ever since I first heard about it and once Denise and Ken started pointing out stand after stand, I finally got the search image for it! 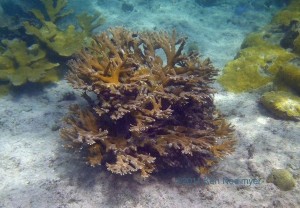 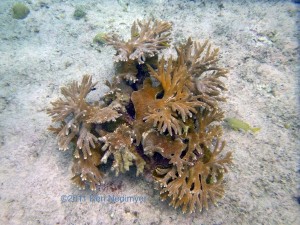