We’re starting Search Image, a series of posts that are inspired by magazine articles we’ve written over the years. When biologists use the term search image they are usually referring to the sensory signs like smell, sound and visuals that predators are wired in to (my unscientific phrase) when searching for prey. As photographers and fish surveyors we develop our own search images for a certain creature or behavior, usually after having seen it for the first time, or after becoming aware of its existence. 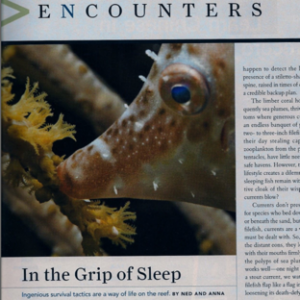 The first time I noticed a sleeping filefish was in 2007 during a night dive in Bonaire. I was in a fairly brisk current, trying to hold my position next to a large gorgonian where I had spied a large needle shrimp a few minutes earlier. Close to where the shrimp had been, I noticed a tiny Slender Filefish, Monacanthus tuckeri, that was swaying back and forth, almost like it was attached to the gorgonian stalk – and it was! By its mouth! We spent the next few night dives inspecting every gorgonian for filefish so Ned could get a definitive shot of the fish biting down on a gorgonian polyp. He did, and we wrote about it in the February 2008 issue of Scuba Diving magazine. The article, Encounters: In the Grip of Sleep, is scanned in here if you want to read it. My video that accompanied the article is at the end of this post.

With that search image of the sleeping filefish in my mind, I started noticing them on many night dives. I saw two more species in Bonaire and several Indo-Pacific species during our night dives in Lembeh Strait, Indonesia – shared with you in this short video:

..And here is the video from 2008, originally seen on ScubaDiving.com: