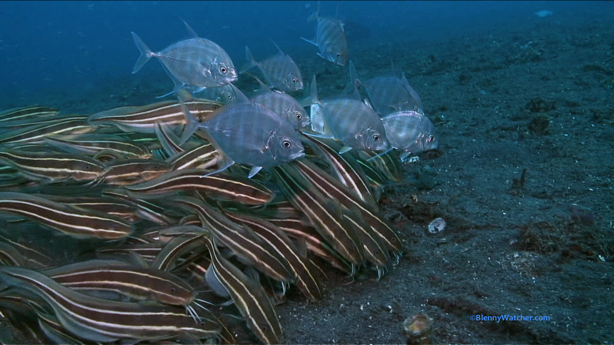 Lembeh Strait, Indonesia – I am a sucker for Striped Catfish, Plotosus lineatus. Their schooling and feeding behavior is mesmerizing and I follow these fish so often that I am teased about my magnum opus, Catfish, the Movie (to which of course I turn a deaf ear.) Juvenile Striped Catfish form dense balls that are often seen “rolling” over the substrate. The fish at the leading edge of the aggregation feed, as those above roll down over them. They can look a bit frantic yet beautifully organized at the same time. As the fish grow older, they feed in a looser formation, but still in that rolling maneuver. Often, other species like soapfish, jacks or even lionfish will feed alongside them, taking advantage of the disturbance. 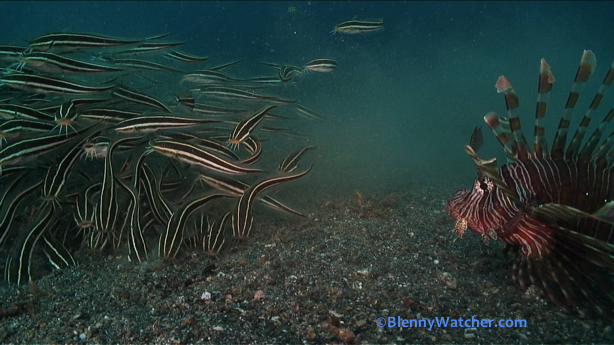 We’ve had two remarkable catfish encounters in the last few years. I might have caused the first. While Ned and our guide Liberty were working one of their 30-minute shrimp (we call them that because it takes 30 minutes to get one shot), I occupied myself with a swarm of feeding catfish. For 45 minutes, they didn’t seem to be bothered at all by my presence, then suddenly, they rose up into the water column in a very tight ball. After about three minutes, they settled back down to the bottom and resumed feeding. I wonder if they grew tired of me and this was some kind of escape response. The second encounter was the following year in the same bay. On the way out to a 60-foot rubble field, we stopped to photograph a cluster of catfish faces staring up from the base of a yellow sheet sponge. After a short exploration of the area, I returned to find Ned encircled by a milling mass of 5-inch fish. We wrote about it in the October 2008 edition of Scuba Diving magazine. It was on their website here, but if the link is no longer available, you can look at the scan here. In our article, he says not a catfish laid a whisker on him but look carefully in this video – you’ll see some of them nipping/tasting (?) his arm. This vision of Ned, surrounded by catfish, is one of my all time favorites: