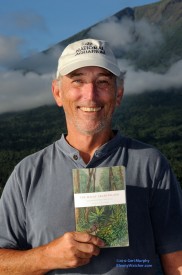 From the Archives: Anyone who has attended one of Ned’s talks about Indonesia has heard the tale of Alfred Russel Wallace, who is today considered one of the most renowned field biologists of all time and the father of biogeography. In 1858, after weathering a bout of malaria while on Ternate, he wrote, “On the Tendency of Varieties to Depart Indefinitely From the Original Type.”  Wallace’s story and the chain of events set into place by his paper are chronicled in our Summer 2001 Ocean Realm article, “Ghosts of Indonesia” which is scanned in here, if you want to read it. A visit to Ternate has been high on our list ever since we started traveling to Indonesia over twelve years ago and we finally made it in 2009. As our liveaboard dive boat passed the island, we all rushed up to the bow to get a photo of Ned, proudly posing with Wallace’s book, The Malay Archipelago, as Ternate’s volcano, Mt. Gamalama, steamed in the background.