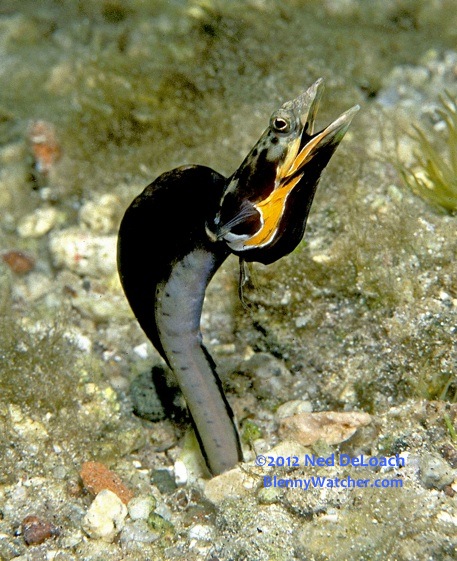 Sea of Cortez, 2002 – We chartered a six-passenger liveaboard dive boat for a week to explore the area just outside La Paz. The captain/owner was just getting started and didn’t know the sites all that well, but was willing to explore, so our dives ranged from all out flops to some real winners. The mangrove lagoon off Isla San Jose, described by John Steinbeck in his classic Sea of Cortez, proved to be the perfect place for critter hunting and included a large colony of Orangethroat Pikeblennies. We had learned from our work in Bimini, that male pikeblennies, out to attract the gals, tended to be more animated in the late afternoon, giving us more opportunities to get some great photos. That was also the case here and we ended up staying the remainder of the week.

The next week, we joined a group of fish surveyors from REEF on another boat, and this time, the captain, a veteran of many big animal itineraries, was skeptical of our request to visit the mangroves. We were so stoked from our previous week’s success, that he acquiesced. I captured several blenny battles on video that made it onto the Sensational Seas DVD and Ned added to his collection of pikeblenny behavior images, including one of a female leaving the shelter hole of a displaying male, presumably after depositing her eggs. Our story about those encounters was published in the November 2008 issue of Scuba Diving Magazine. Click here if you want to read it;  I’ve reloaded the vintage video here: