June 2012 ~ Earlier this week I posted photos from the first week of our Lembeh Fish & Critter Hunt with Eco Divers Resort Lembeh. We sadly said goodbye to our friends from the Octopus Army and greeted a new crowd for Week 2 and wow, another super adventure! The group embraced the hit list of 30 animals with gusto and with the help of our superb dive guides, most had checked off the entire list by mid-week. One of the most memorable days included sightings of a Coconut octopus, a Flamboyant Cuttlefish, a Wonderpus, two Mimic Octopuses and two different species of Blue Ringed Octopuses, all topped off with Ned’s most coveted creature, a Hairy Octopus! As with last week’s adventure, we’ll include more in an upcoming post at marinelifeblog.com and I’ll load video to our Blenny Watcher channel when I get to a better Internet connection.

The little coral gobies that live down in the shallow water porites and acropora corals move around so quickly that it is difficult to get a good look at them. It takes time, often an entire dive, to capture a recognizable portrait. These little Broadbarred gobies are so beautiful, they are worth the time!

There were plenty of the more common Melibe nudibranchs at several sites, but this one was very different – we have never seen the Melibe megaceras before. 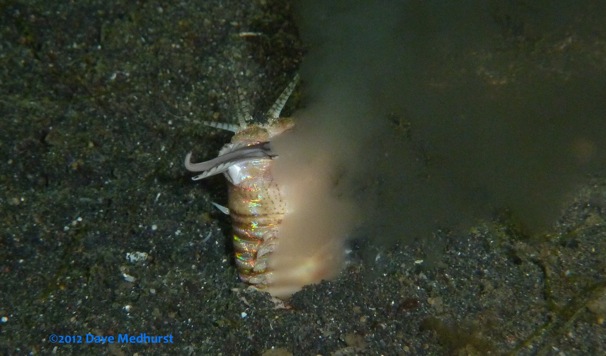 Talk about being in the right place at the right time, during a night dive, Dave Medhurst captured this shot of a spawning Bobbit worm! The other half of our group reported the same species spawning on another dive site at the same time.

What do we do between dives? We watch for drifters, like tiny Sargassum fish in floats of weed. We spend our surface intervals between dives, on Eco Divers day liveaboard, but when Ned spotted some tiny fish in the drifting Sargassum, we jumped down onto the service boat and started hunting.

These sumo crabs, commonly called Urchin Carry crabs, can be seen sporting everything from urchins to discarded banana peels to disguise themselves while foraging around the featureless bottom. This one, carrying a sand dollar, was spotted last week but I missed it so I was lucky to see it on the same dive site a week later.

I’ve posted a lot lately about benthic ctenophores – this is a video frame capture of more ctenophores with their feeding tentacles out – this time on a really beautiful Warty Sea Star.

Sometimes the mantis shrimp are rather pugnacious. I got too close and this one popped the front port of my camera. I’ll include it in the upcoming video.

Ned continues his quest for tiny critters and our sharp-eyed guides find this nut sheath bubble.

What a wonderful week! We made many new friends, learned a little and even found a new critter or two – and really look forward to next year’s event with Eco Divers. We hope  you can join us!