October, 2012 ~ Aboard the Dewi Nusantara, Blennywatcher is circumnavigating the island of Batanta, one of the four main islands of the Indonesian region known as Raja Ampat. This is the eighth year that we have dived in this area but the first with an itinerary that would keep us almost entirely around one island. Because of its proximity to Sorong, the starting and/or ending point for most liveaboard dive boats, Batanta is almost always on every itinerary but I don’t know how many people who make the 3-day journey to eastern Indonesia would be satisfied with seeing just one of the famous islands. We’ve had such good luck with muck dives here and seen just enough of the topside birds (Blyth Hornbills, Palm Cockatoos, Red Bird of Paradise) that we have long fantasized about an all-Batanta trip. Wendy Brown, cruise director of the ship, organized this custom itinerary for us and is masterfully balancing the schedule to keep divers diving, birdwatchers watching and beachcombers picking.

We are anchored in a bay between Batanta and the islands of Yum and Wruwarez, a place we first visited in 2006 with legendary dive guide Larry Smith. Larry had promised us a new site full of Mandarinfish and cryptic shrimp but he also loved birds. Insisting on anchoring the boat as close to islands as practical to watch birds in between dives he also made it a point to be on deck at dawn and dusk to listen to them. It was on one of those evenings, anchored close to Yum for a night dive, that we watched what seemed like over 100 hornbills, large and noisy birds, gather and settle in for the night in several trees. Larry, large and noisy himself, routed everyone from cocktails and photo editing, to gather on the back deck and watch the unforgettable spectacle. The next morning, when I asked him the name of the dive site, he said, “Well, I don’t know Anna, maybe we should call it 100 Hornbills, what do you think?” 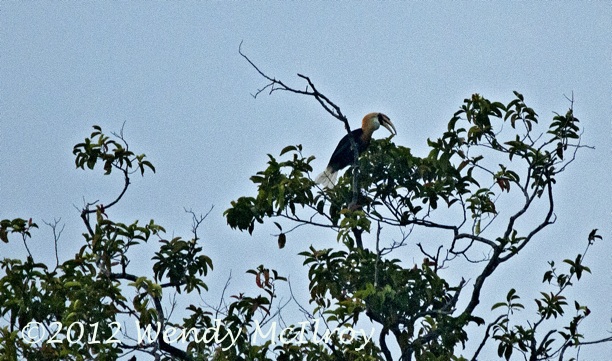 This trip, there is no need to rout people. Long before sunset, most are already waiting on the upper deck with field glasses and cameras, waiting for the 100 hornbills that I boldly promised. Cockatoos are settling in over on Wruwarez and a couple of sea eagles have arrived, upsetting the terns, but no hornbills. We are speculating: maybe we saw them during a different season… could they have been gathering to mate? It was, after all, seven years ago. Finally, Yan calls out that he sees hornbills and all lenses turn to Yum. It is late – almost dark, but Wendy loads us into a tender (the 57-meter Dewi Nusantara is too big to anchor near shore) and we arrive just in time to see another dozen or so birds join the flock gathered in two trees. We hadn’t seen them because they were arriving over the top of Yum, from a different direction than I remembered. They number more like 50 than 100, but they are here and I am much relieved. Wendy arranges for us to be back out in the tenders at 5:30 a.m. to hear the melodic calls of other waking birds.

Sadly, Larry passed away in 2007. We have since adopted the Dewi Nusantara as our liveaboard of choice for this area and many other dive boats also visit the sites in this bay. The name, 100 Hornbills, is long-forgotten or maybe never again used (Larry sometimes made up new names for sites to please his guests) but I am so pleased that the birds are still here. (special thanks to Wendy McIlroy for the use of her hornbill photos)