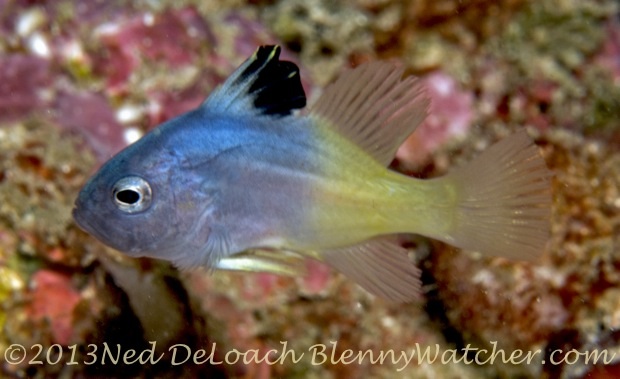 March 2013 – Waigeo, Indonesia In October 2012, I found a tiny fish that I couldn’t identify. It was wary, darting into a small hole when I got too close. I shot video, noted the location and on the afternoon dive, navigated back to it so Ned and several others could take photographs. Back on the boat we decided, based on its body shape and distinctive dorsal fin that it had to be a juvenile Doublebanded Soapfish (Diploprion bifasciatum). Other than noting that they sometimes feed opportunistically with Striped Catfish, I’ve never paid much attention to this species but finding a juvenile was exciting because we’d never taken a photo of one.

Four and a half months later, cruising from Sorong to Ternate, we stopped in Waigeo to dive the same site. Out of curiosity, I asked our dive guide, Yann Alfian, if we were near the section of the wall with the wide ledge where I’d found the little fish back in October. We were – so down we went to check it out. There on the ledge, hovering near the same hole was what I’d like to think was the same fish, developing the banded marking that gives the species its common name. I found another of similar size and coloring about 30 meters farther along the wall. But my soapfish tale doesn’t end with these juveniles.

Soapfish get their common name because of their mucus coating that is reportedly toxic and highly distasteful to potential predators. I have heard that when placed in a bucket, the water becomes bubbly and frothy from this mucus. They are also very opportunistic feeders – as mentioned earlier, we have seen adult Doublebanded Soapfish traveling with rolling balls of Striped Catfish, poised to grab whatever small prey items are routed out by the foraging catfish. In Bonaire, on sites that are dived frequently at night, a Caribbean species, the Greater Soapfish, has become a nuisance by taking advantage of divers lights to feed. Quite a few of our shots have been ruined by the sudden appearance of a soapfish snout in the scene.

I don’t know how long dive boats have been visiting Aljui Bay, but we have stopped off there for at least two nights every year for the past four – most recently in October 2012. Sometime between then and now, the Doublebanded Soapfish of Aljui have started using the beams of our dive lights to hunt and like their Caribbean cousins, they are extremely annoying. Every time I settled in to video something, one to three soapfish would appear, darting in and out of my video in pursuit of some small fish that was unfortunate enough to be caught in the beam of my light. As I meandered along, my light caught a Wobegong Shark, a bottom dwelling ambush predator, and before I could set up my lights for a good shot, a pesky soapfish darted in, was sucked up by the Wobegong and just as rapidly spit back out. From the shark’s violent reaction, the soapfish must have tasted pretty bad.  And the experience must not have been great for the soapfish either – it disappeared for the rest of my dive.

The video may be viewed by clicking below or by visiting our Blennywatcher YouTube Channel here.