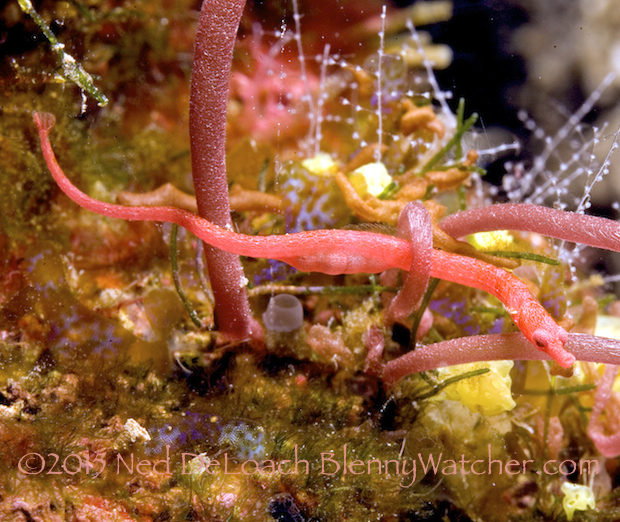 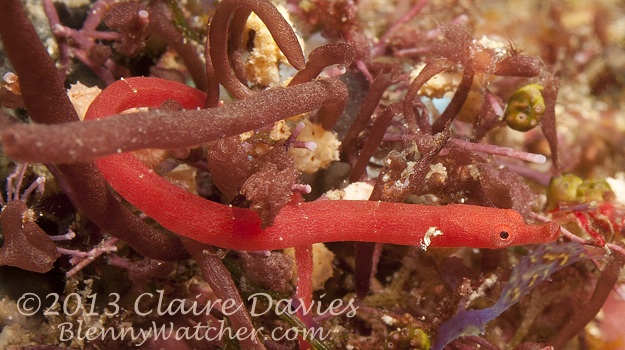 April 2013, Indonesia ~ There is great excitement this morning – Claire Davies has surfaced reporting that she has seen “Lynne’s Pipefish”, so now there is no question where we’ll be making the next dive. Lynne and Roger Van Dok are on high alert as Claire describes not one, but four of the tiny, red fish nestled around a small patch of algae, tunicates, hydroids and sponge – exactly the habitat in which Lynne found her first in Papua New Guinea over four years ago. 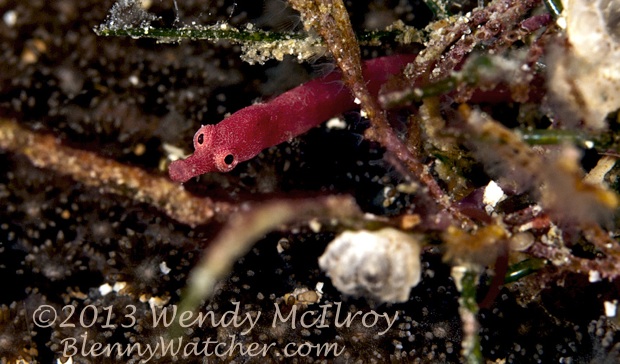 It was during the first week of our month long stay in Papua New Guinea that Lynne confided that she had seen something interesting but was not quite ready to share it because she wanted to make sure she could repeat the find. For the next few days, she and Roger spent their dives, heads down, slowly moving along the reefs and walls. Finally, during a dive along a small wall, she called us over, gesturing to a small clump of reddish sponge, which, because of its size, might be called “toothpick” sponge. Nestled among the tiny projections were two pipefish that, on an unlighted reef, were the exact color of the sponge. The moment we switched on our dive lights, the color of the pipefish was a popping red. It was the first time our guides had ever seen it too. 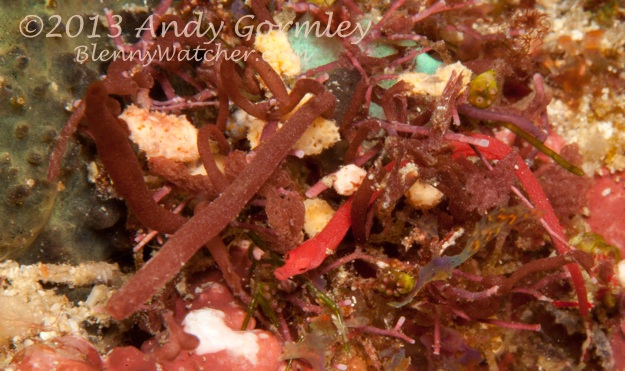 I blogged about it in our trip report and Ned sent his photo to Rudy Kuiter, one of the world’s pipefish experts, who responded that he thought it was a color form of the Pygmy Pipefish, Micrognathus pygmaeus. He explained that the species has several forms. Based on his opinion, we included it as a color form of M. pygmaeus in our Reef Fish Identification: Tropical Pacific and supplied the photo for Allen and Erdmann’s recent Reef Fishes of the East Indies. 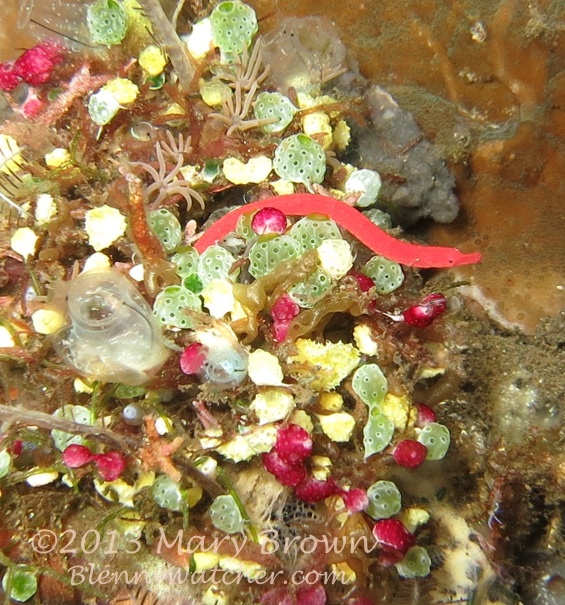 Since those first sightings on Cheri’s Reef and Barracuda Reef in November 2008, Lynne, Roger and anyone else they can enlist in the search, have looked for the pipefish on our cruises from Komodo to Alor, all through Raja Ampat, across the Solomons, and now on our month long cruise aboard the Dewi Nusantara from Sorong through Halmahera and down to Ambon. They have found them in the Solomons, Bali and now with Claire’s sighting, in Seram. None of our dive guides in those areas had seen the fish before they learned about them from Lynne and Roger. Lynne is a retired biology teacher with a keen eye for spotting cryptic animals underwater and a sense of the importance in noting details such as habitat, depth, etc. Although she and Roger search everywhere, they have always found the pipefish on wall outcroppings at depths between 13 and 18 meters (which is deeper than reported for the other M. pygmaeus form) and always in association with the small, tight tunicate and sponge clumps. Maybe at some point, the species will be studied more completely but for now, this particular color form, in this habitat has among our group, affectionately become known as “Lynne’s Pipefish.” Have you seen this pipefish? We’d love to hear the details. I have merged some of my video with additional photographs of the pipefish from each of the locations into a video on our BlennyWatcher YouTube channel: