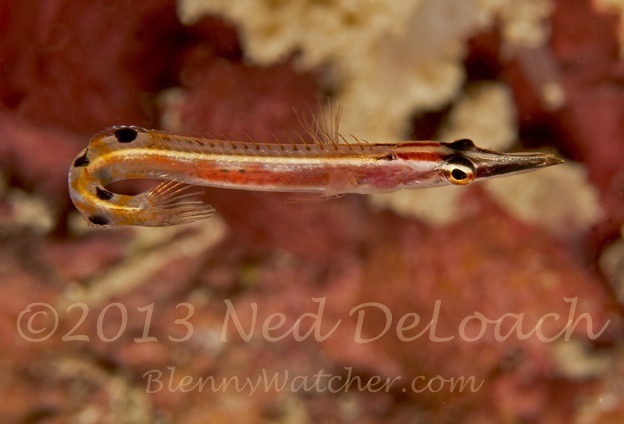 Lucayablennius zingaro. When I first learned the scientific name of the odd little Arrow Blenny my curiosity was piqued. Ned and I were living in Bimini at the time so Lucaya, as in Lucayans, the first inhabitants of the Bahamas, was a familiar term, but I had to look zingaro up in the dictionary. It is Italian for Gypsy and we liked the sound of it and joked if we had another son we would name him Zingaro DeLoach and he would wander the world. This was back in the mid-90s, the pre-online reference days and by the time we got back to the Rosenstiel Library, I had forgotten all about pulling the paper that formally described the Arrow Blenny and in which the origin of the name was documented.

In 2004, we began working with Stan Waterman on the publication of his memoirs, Sea Salt. In the course of reviewing the wonderful collection of photographs from his many adventures, I noticed the name on the back of his boat: Zingaro. This was the purpose-built dive boat that Stan put much sweat into before sailing in 1954 from Maine to the Bahamas, where he ran a charter business for several years. He credits that move with changing his life (Read Stan Waterman Diving Pioneer to see just what an amazing life he has had). I made a mental note to ask Stan if there was any connection between the name of his boat and the Arrow Blenny but forgot each time we saw him.

This week, while reviewing video from Utila, including some footage of the Arrow Blenny, I finally remembered to look it up. Through the miracle of online access to archived journals I found the 1957 paper with the original description, “A Review of the Blenny Genus Chaenopsis, and the Description of a Related New Genus from the Bahamas” by James Böhlke. And there it was in the paper, “..collected by Charles C. G. Chaplin, Stanton Waterman, Edwin Brownrigg and the writer from Sta. 295, about 1/4 mile north of the east end of Green Cay, Bahamas..” and “…collected from Waterman’s boat, the Zingaro, for which the species is named…“

So finally, after almost 20 years, I had my answer.

When I contacted Stan to ask for permission to use his photo, his comment was vintage Waterman: “You will be amused to know that I had thought of naming my boat, the Polyp (in honor of the coral building block). Then I learned it was also a growth in the alimentary canal of humans. I backed off and named the boat Zingaro, which is Gypsy in Italian.” Amused, yes, because Lucayablennius polyp just doesn’t have the same ring to it!