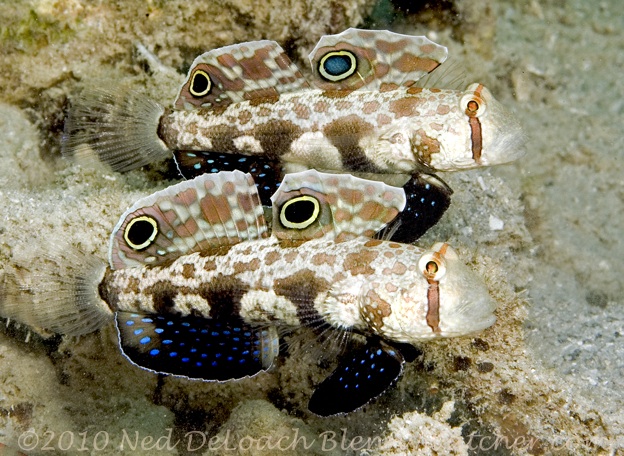 Here is your dose of fishy cuteness: The Signal Goby, a.k.a., Crabeye Goby, a.k.a., Twinspot Goby. Not only fun to watch, this fish has some pretty curious reproductive behavior, as we learned a few years ago.  Signigobius biocellatus feeds by sand-sifting so we find them just off reefs or near shorelines in silty, nutrient-rich sand. We have seen them from Palau through Indonesia, so they aren’t really rare, but their populations are certainly not dense. Almost always found in pairs, they tend to be a bit wary, springing off quickly to their burrows if we approach too closely.

A few years ago, on a house reef dive at Tawali Resort in Papua New Guinea, I was pleased to find a busy pair that didn’t seem to be disturbed by my presence. Our friend Claire Davies, Ned and I watched for over 90 minutes as the little gobies worked as a tag team, excavating several different burrows with their mouths and rapidly fanning with their tails, pausing occasionally to scoop up a mouthful of sand to feed. My excitement at the dinner table that evening got others fired up about going back to look for them.

The next day, I led a few friends to the site where we had watched the little gobies the day before but now there was only one! I looked everywhere, but no mate – just a single Signal Goby, bouncing around feeding, as if nothing were amiss. At dinner, we speculated about the disappearance of the fish. Ned said a snapper probably ate it. Yeah, well I suppose that could have happened but this was a fully grown fish that had survived out on the sand long enough to find a mate and dig all those burrows. So if it got picked off by a snapper just as I started observing it, this was incredibly bad timing (for me and the fish). I imagined a family spat or maybe a homewrecking third party (In the Caribbean, we once observed a mated pair of Hamlets break up over a third hamlet and reunite a few days later – there are all kinds of soap operas down on the reef).

Always the optimist, I went back out the next morning to look for it again, but still found just the one. Then at lunch, Claire reported that the missing Signal Goby was back! After quizzing her carefully to make sure she had been in the same spot, I went back to see for myself and sure enough the reunited pair was  bouncing around, digging and pecking at each other. An online search turned up a paper from a 1977 study that explained the disappearance:  after the female lays eggs in a burrow, she seals the male in, releasing him periodically over the next few days to assist with burrow maintenance. Now wouldn’t it be fun to have a “burrow cam” to watch all that! We wrote about our experience in the Winter 2010 issue of Alert Diver: The Peculiar Fate of the Missing Mate and I just reloaded the accompanying video on our Blennywatcher YouTube channel: