Here are a few more favorite Blennywatcher images from 2013. If you are a regular reader of this blog, you will already have seen most of our favorite images, but some didn’t make into a post and others were published earlier this year in Alert Diver, Scuba Diving or Wetpixel. So, we’re ringing in the New Year with a few more photos from 2013, starting with this Anchor Tuskfish displaying quite a mouthful of teeth. The menacing look is quite out of character for this mild mannered member of the wrasse family.

Our first trip of 2013 was a month long journey through Indonesia aboard the Dewi Nusantara that took us from Sorong up to Ternate then back down to Ambon. We were off to a grand start with a new fish for our life lists: the Soft-coral Pipefish, Siokunichthys breviceps. Cruise director Wendy Brown and our guide Yann Alfian had a newly acquired search image for the tiny pipefish and found a few right away on our first dive at Mioskon, setting the bar pretty high for the rest of the cruise. 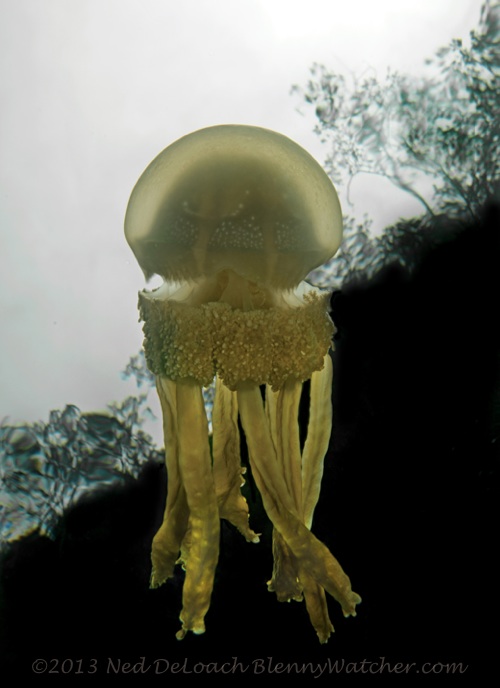 One of my favorite areas in the Raja Ampat region of Indonesia is the island of Waigeo and this time, Wendy surprised us with a snorkel trip in a small bay that is full of jellyfish. We spent an hour swimming (cautiously) with the lovely jellyfish and Ned, “Mr. Safety”, reported that they do not sting – he knew this because he tested it by putting his entire hand in the tentacles.

The steep walls that line the waterway to the bay are draped with blooming orchids and a climbing variety of the exotic pitcher plant, a carnivorous plant with a leaf that develops into a tendril that ends in the lidded pitcher. The plant secretes nectar that attracts insects into the trap below that is filled with digestive fluids.

Off Halmahera, we photographed this gathering of Twotone Dartfish, Ptereleotris evides (you can just see one Zebra Dartfish hanging out with them). We usually see this fish in pairs, hovering near sandy burrows. This gathering was unusual not only in number, but in the choice of burrow – a tall, nearly hollow coral head.

This Blue-ringed Octopus had just emerged from beneath a green and brown crinoid and was in the process of changing color to blend in more closely with the reddish sponge.

A two-inch Spotted Croucher, Caracanthus maculatus, peeks from within the branches of its Acropora coral home (Pisang Island, Indonesia).

Back in Florida, we managed two very quick trips to the muck-diving capital of Florida, the Blue Heron Bridge in Riviera Beach. Ned followed this Atlantic Longarm Octopus, Macrotritopus defilippi as it danced across the sand. I missed the action because I was obsessing over a pair of spawning Molly Millers (see Hello Molly).

As we were exiting from the dive, I stopped to check out the base of a bridge piling and saw a blenny that I did not recognize. I grabbed Ned to take this shot and sent it to Dr. Ben Victor for identification assistance. It turned out to be a juvenile Mock Hairy Blenny, Labrisomus cricota, originally described in 2002. The juveniles look very different from the adults.

In July, we visited Utila in the western Caribbean for the first time. I prepared a “hit list” of species we wanted to photograph and with the help of the guides at Deep Blue Resort, found them all. This Bearded Toadfish, Sanopus barbatus, with its impossibly goofy face was quite a sight. We’ll be highlighting the rest of our finds in an upcoming Alert Diver Magazine article.

Two summers ago in Bonaire, Bas Tol guided us on an East Coast night dive, where he showed us two Circled shrimp, Gnathophyllum circellum. We had never seen this shrimp any other time, but our friend Ellen Muller, sees them regularly on Bonaire and they had been reported them a few times from the Blue Heron Bridge. We finally found several on our own during a coral spawning night dive this past September during our annual stay at Buddy Dive – they were on Tiger Tail Sea Cucumbers! Their close relative, the Bumblebee Shrimp, is known to feed on the tube feet of echinoderms, so I wonder if the little Circle Shrimp were dining on the Tiger Tails or just along for a ride. (see Scuba Diving Magazine, Critter Hunt: Bumblebee Shrimp)

After many years of looking for this, I finally saw spawning Christmas Tree Worms! This had become a bit of a joke among my friends as I always seemed to be in the wrong place at the wrong time when others saw it. This phenomenon has been observed at all hours of the day and night on many different moon phases, so predicting it was impossible. It was particularly maddening because the spawning is a slow process, lasting 15 to 20 minutes, so it is not like it would happen just as I looked away. I had resigned myself to never seeing it, then on coral spawning night, I lucked up! The way the eggs or sperm move slowly up and around the spirals of the feathery structures is slow and beautiful.

We devoted most of our month long Bonaire stay to hunting for blennies, which meant including visits to some of the generally less accessible dive sites in order to cover different habitats. At the southernmost end of the island, in 2 meters depth, we not only found blennies, but many species of gobies, including the adorable Ninelined Goby, Ginsburgellus novemlineatus.

And wrapping up 2013, we were very pleased to learn that a blenny – the Two-bar Triplefin was named in our honor: Enneanectes deloachorum. This is a male in its nuptial colors. Dr. Ben Victor described the fish in the paper: The Caribbean Roughhead Triplefin (Enneanectes boehlkei): DNA barcoding reveals a complex of four West Indian sympatric cryptic species (Teleostei: Blennioidei: Tripterygiidae). This was indeed an honor and means a lot to us.

With that, we wish you happy diving, critter hunting and fishwatching in 2014! 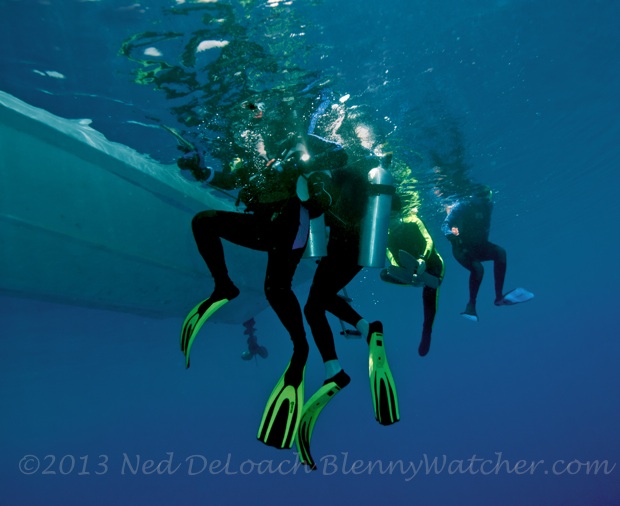