Why We Love Lembeh

In 1999, on our first trip to Lembeh Strait, Indonesia, we were introduced to dives unlike any we’d ever experienced. No colorful coral reefs here – this was “muck diving” – a new concept to us. Dropping down into greenish water to behold a wide-open expanse of nothing but black sand was almost enough to send many of us scurrying back to the boat. But it had taken us 44 hours and 5 flights to get here, so we stuck like glue to our dive guides who began pointing out bits of trash and clumps of sponge that magically turned into fishes and crabs and octopuses. We were hooked –  so hooked, that in the 15 years since that first trip, we have been back 24 times!

We are returning in late May and there is still room if you want to join us. We’ll be offering our 3rd Lembeh Fish and Critter Hunt with Eco-Divers Resort Lembeh. This is our week-long workshop on reef fish and invertebrate identification, behaviour and photography – all centering around the critters of Lembeh Strait. The details are available on the Eco Divers web site. To get an idea of the possibilities, check out my video from the 2012 trip: Two Weeks in Lembeh or read our two blogs posts from 2012 by clicking on Lembeh Fish and Critter Hunt – Week One and Week Two. We hope you can join us!

Back to why we love Lembeh Strait:

On that first trip in 1999, we saw our first Wunderpus Octopus (it had not even been formally described at that time), ghost pipefish, hairy frogfish, and pygmy seahorses. We watched a crocodile fish gagging as a small swarm of catfish swam in and out of its mouth every time it coughed (it finally spit out a rock, apparently sucked in when it lunged at the catfish). There were Fingered Dragonets, Cockatoo Flounders, Pegasus Seamoths and nudibranchs of every shape and color. We were shown a small colony of gorgeous black and white striped fish living in some long-spined urchins in two feet of water off a small island in the middle of the Strait. “Banggai Cardinalfish,” confided the dive manager, “Supposedly escaped from a tropical fish importer’s tanks.”

Over the years, we’ve made many new dive friends and many local friends. We’ve attended a local wedding, partied at the disco in town and had the privilege of sitting onstage as guests of the mayor during Bitung’s annual Tulude celebration. We’ve watched the area grow from two dedicated dive resorts to over twelve, the Banggai Cardinalfish have moved up the Strait, sharing anemones and urchins with local fishes and we’ve recorded some amazing images and behaviors. Many would not have been possible without our exceptionally talented dive guides, whom we’ve always considered partners in our success.

During the research for the Reef Creature Identification Tropical Pacific book, our dear friends Jim and Cary Yanny of Eco Divers arranged for private boats and guides to allow us to dive on our own schedule. If the resort boats were full, as they often were, we used a local water taxi, whose owner, Abang, had worked with many film crews and not only knew the dive sites well, but understood the idiosyncrasies of photographers on a mission. While Ned and our guide worked on a subject, I searched for additional animals. Often, even if I found something of interest, my navigation skills were rendered useless on the underwater desert and I couldn’t always locate Ned and our guide to lead them back to the subject. No matter how long we were down or where I happened to surface, I could count on Abang, always at watch on the back of his boat, to point out their bubbles.

Our primary guide was the brilliant Liberty Tukunang, who remembered every animal that Ned shot during our four years of working together. Once when he waved a puzzled Ned off a cryptic shrimp, his answer back on the boat was, “You shot that 2 years ago at TK3 on the night dive.” On Liberty’s days off, Ben Sarinda would often guide us. Liberty would carefully question Ned about what Ben had found and was visibly crestfallen if it was anything spectacular. Ned would tease them both, “Liberty, you are good, but Ben is lucky!” We recounted one of Ben’s exciting finds, a Shell Mimic Shrimp, in our Alert Diver Magazine article, The Great Charade.

Liberty and Ned worked together, sometimes looking like a surgical team, kneeling in the sand as Liberty tenderly coaxed a shrimp out into view with a satay stick, just enough for Ned who was manually focusing the entire time, to get an adequate identification shot. We called them 30-minute shrimp because it often took Liberty 30 minutes to get the shrimp to walk into view long enough for Ned to tap the shutter button. This was not 30 minutes to get the in-focus, full-view photo that was good enough for the book – it was 30 minutes to get one exposure, good or bad. If the shrimp popped back into the crinoid or acropora coral, they started over again.

At times, our good friend, William Tan, author of several underwater pictorial books, joined us with his guide, Noldy Rumengan. In his other life, William is a violinist for the Singapore Symphony and Noldy is the guide who discovered the Rumengani Pipehorse, a.k.a., the Lembeh Sea Dragon. Some of our happiest times were when Cary, also an accomplished photographer, could take a day out of her hectic schedule to hop aboard. It was a heady time – giddy from finding a rare or undescribed species, exhausted by six or more hours a day underwater and happily surrounded by dear friends.

Besides the special friendships, Lembeh has given us other gifts. We saw our first Blueringed Octopus there – then, over a month’s time, followed 13 more individuals, watching them hunt, fight and mate. Ned, who was captivated by Roger Steene’s beautiful flasher wrasse shots, began seeking them out and shot the first photograph ever taken in the wild of the Togean Flasher (finding it in Lembeh Strait was also a range extension for the species). I followed a school of foraging catfish so long, that they turned and worked their way up my leg. Who knows what they found on my wetsuit that made it worth their while but I was enthralled as they rolled up my leg, finally scattering as they reached my hands. The next day, as I sat filming the same catfish in their home log, a frogfish, perched on top of the log, swam over, bumped into my port, tippy-tapped on my head for a few seconds before settling onto my light handle, apparently deciding it was a better spot for luring cardinalfish. Being kissed by catfish and danced on by a frogfish made for dives I will never forget.

We followed a foraging Wunderpus octopus for an hour to see what they eat (shrimp goby shrimp for one thing). We returned to the same dive sites day after day to document the behavior of mating and egg-laying squid. We photographed a previously undocumented relationship of an undescribed porcelain crab that makes its home on the anemones that live on the shells of hermit crabs. Fascinated by this arrangement of crab living on anemone living on a crab, we worked our way up the coast, examining every hermit crab we could find. Ned noticed tiny juvenile Bluespotted Trevallys that took on the striped pattern of the foraging catfish they followed – a new case of opportunistic mimicry that got the attention of several scientists.

With the work on the creature book completed, the emphasis on hunting inverts has yielded to “bimble” diving, i.e., just wandering along to see what might turn up and still, Lembeh produces: on a night dive, Ned found a lovely settling eel, no more than an inch and a half long. In 2012, we finally saw the coveted Hairy Octopus, spent several dives watching a Broadclub Cuttlefish lay eggs and indulged in Ned’s obsession with syphopterons. This past year, I spent my dives tracking benthic ctenophores and we ticked off more than 10 different species of coral gobies, including the very cool Redspotted Coral Goby.

So, no telling what 2014 in Lembeh will bring but it is sure to be special and we are eager to return.  We invite you to join us!


P.S., I’ve scanned the article we wrote for Ocean Realm Magazine way back in 1999 – you can download the pdf:  The Underwater Naturalists’ Indonesian Journal. 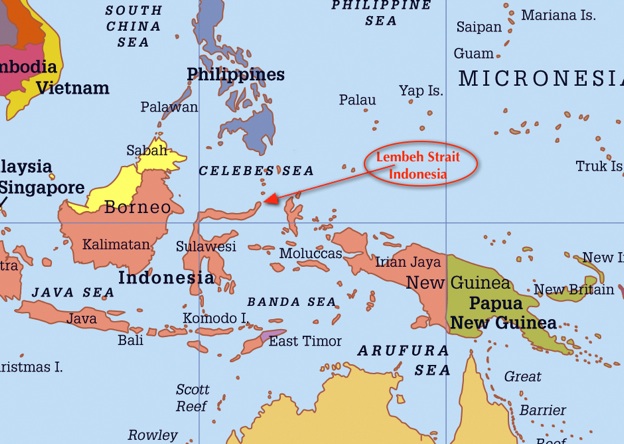