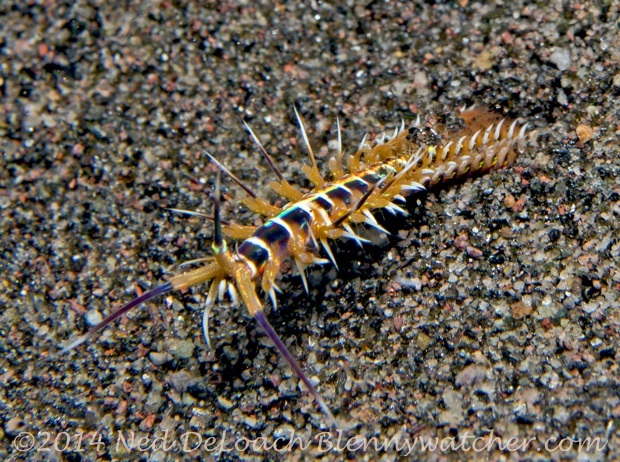 Dominica, February 2014 ~ Poring through the new copy of Reef Creature Identification between dives, our guides Tony and Imran mentioned that they could find Onuphis worms, specifically, an undescribed species that we had never personally seen before. Tony showed us one at the very end of a fish survey dive and in the excitement, ahem, all air was consumed from certain tanks. The site was shallow and full of other interesting things so plans were made to return the following week to photograph this tantalizingly beautiful creature. We’re saving the adventures of Team Worm for a future article, but the above image gives you an idea of why we were so excited. 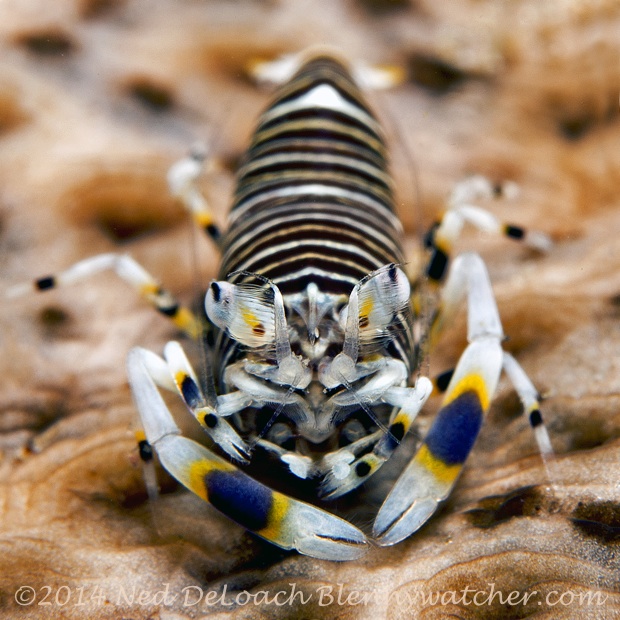 Two years ago, we found many Bumblebee Shrimp but almost always under and around urchins. This time we found the odd little quarter-inch shrimp on nearly every sea cucumber we examined but hardly any in association with urchins (and Dominica has a lot of urchins). Bumblebee Shrimp, Gnathophyllum americanum, feed on the tube feet of echinoderms (urchins and sea cucumbers belong to the same phylum: Echinodermata) so this must have been sea cucumber season for the little epicures. 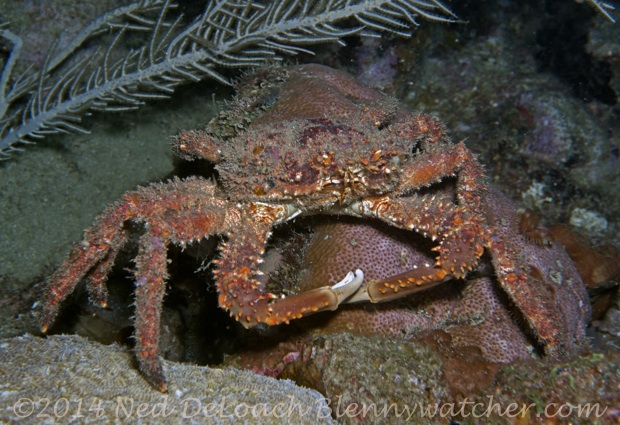 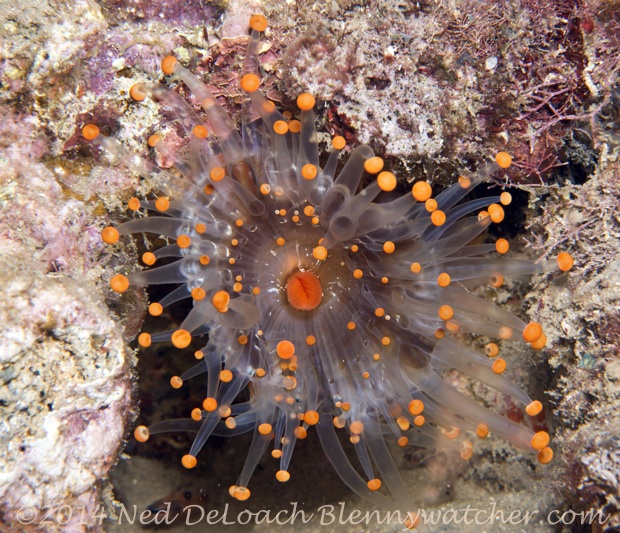 Night dives are a good time to see invertebrates that venture out under cover of darkness to feed. I tend to take Channel Clinging Crabs, Mithrax spinosissimus, for granted – these large (5-to-7 inch carapace) crabs are not particularly uncommon; however I probably saw more on our one night dive than I have seen in all other Caribbean locations put together – there were a lot of them. Same goes for Orange Ball Corallimorphs. These are difficult to show to other divers because the second we hit them with light, they retract their translucent tentacles. 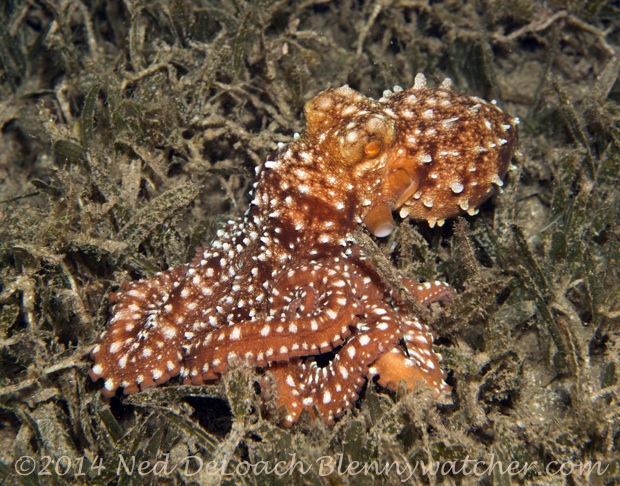 In contrast, on the same night dive, I saw my first Atlantic White-spotted Octopus, Octopus macropus. There is an octopus species in the Pacific that looks very much like this one. It tends to be the most wary and shy of any that we encounter so it was very interesting that this Caribbean species behaved much the same way. 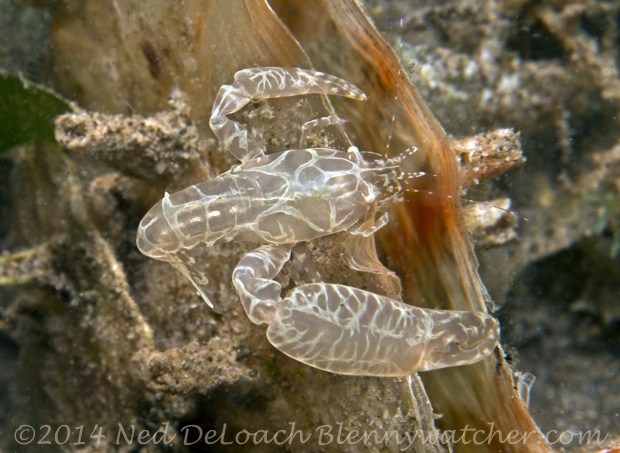 There were a lot of pen shells in the shallow areas of both grass and sand. Since he had never photographed one, Ned suggested that we hunt for the Pen Shell Shrimp, Pontonia mexicana, that lives symbiotically within the shell. That’s all Imran had to hear – he was on it in a flash. 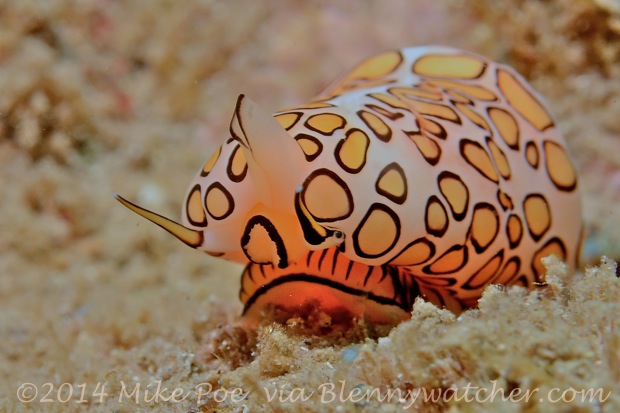 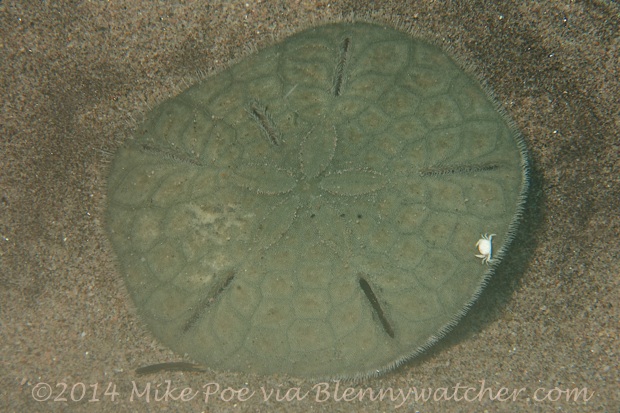 Our dive buddy Mike Poe shared several of his shots: I really like the up-close view of the little one-inch Flamingo Tongue, Cyphoma gibbosum. His shot of a live Sand Dollar is interesting – you can see a little white Sand Dollar Pea Crab, Dissodactylus mellitae, that lives symbiotically with the echinoderm. 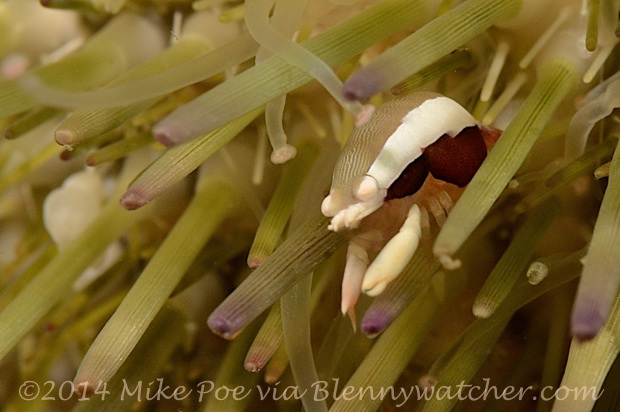 Another interesting find was tiny Urchin Shrimp, Gnathophylloides mineri, living on sea urchins. They feed on the epithelium of sea urchin spines and blend in so well, that it usually takes a while to see them. 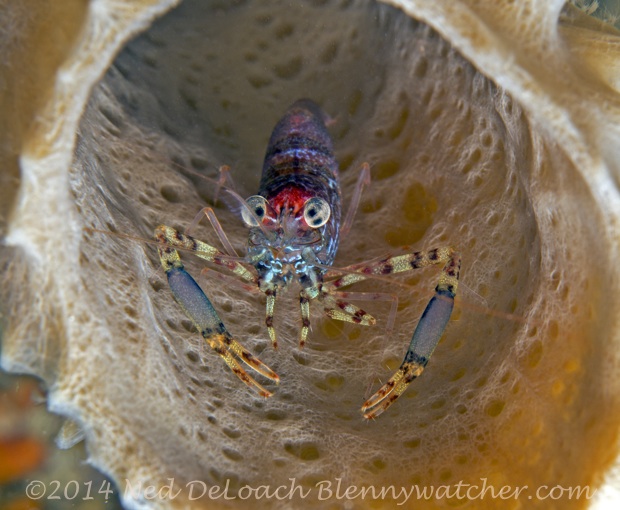 We end with one of my favorite shots, taken by Ned. I think this Twoclaw Shrimp, Brachycarpus biunguiculatus, rivals the fishes featured in our previous post, for cutest critter on Dominica. Check back soon, for more of our favorite sightings on last month’s visit to Dominica, including cool finds in the grass beds.