This is why they are called Fangblennies! Dr. William Smith-Vaniz’s 1976 monograph, The Saber-toothed Blennies, Tribe Nemophini, was a must-read when we started diving in the Indo-Pacific many years ago, but it was the cover of his publication (see below) showing the recurved canine teeth of the lower jaw, that turned these cute little reef fish into the stuff of nightmares and inspired my quest to see them for myself. 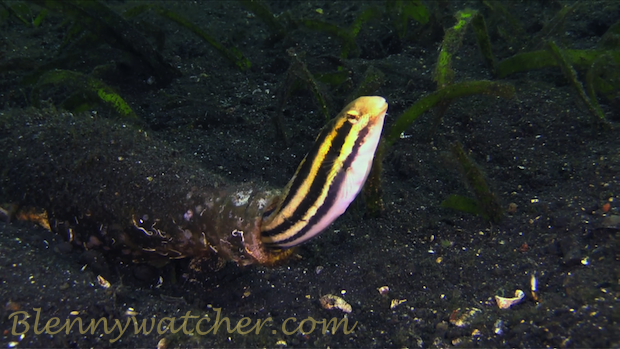 Saber-toothed, a.k.a., fangblennies, with the exception of one species in the eastern Pacific, are found in the Indo-Pacific. Unlike other blennies, most saber-toothed blennies have a swim bladder and can often be seen swimming up in the water column. They get their common name from the well developed, backward pointing canine teeth in their lower jaw that are used for defense.

In addition to describing these blennies, Bill collaborated on research of mimetic relationships among blennies and tested the toxicity of fangblenny bites by inducing a couple of different species to bite him on the midriff and arm – yeow! It was noted in one of his papers, “The few people who have accidentally or deliberately been bitten by a Meiacanthus experienced only mild pain, but swelling surrounding the site of the fang punctures indicated a biological response disproportional to the mechanical injury.” That’s all I needed to read to know that this was not the way I wanted to see fangs – blenny wrangling was out and stalking became the name of the game. Roger Steene has a classic shot of a blenny baring its fangs so I knew it was possible to see it, I just didn’t know it would take me 12 years!

I’ve had tantalizing glimpses of the fangs of other species, but this Petroscirtes (I’m pretty sure it is P. breviceps, the Shorthead Fangblenny) living in a bottle in Lembeh Strait, is the closest I have come. It gave me one quick snap and it was enough to get the video frame capture used at the beginning of this post.  Ned is still trying to capture this with his camera but you can see from the video, how fast he’ll have to be to get it.  You can watch the entire, very quick encounter on this video on our Blennywatcher YouTube channel: