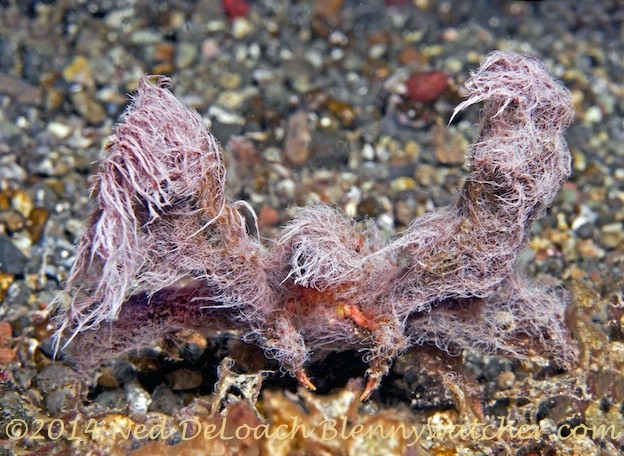 Banda Sea, April 2014 ~ This algae covered decorator crab, found by Ned on a night dive off Pantar, Indonesia, is one of my favorite images from our April trip around the Banda Sea. We boarded the Dewi Nusantara in Ambon and dived our way down through and around the southern perimeter of the Banda Sea and across through the Alor region, ending in Flores. And oh, what a trip!

Last year, I posted about the little bryozoan goby that Graham Abbott found in Ambon. We looked for it all the way down from Halmahera to Ambon, but only found it in Ambon at the end of our cruise. This year, our trip started in Ambon, so we searched for it as we traveled south but didn’t find it until we reached Alor. After we blogged about it last year, the fish became quite an attraction with the dive operators in Ambon and I shared information about how to find these tiny, cryptic fish with others. I am pleased to say that one of them found the goby in Lembeh a few months ago, so it is now known from Ambon, Alor and Lembeh. I can understand Ambon and Alor, but I find it interesting this fish wasn’t seen earlier in Lembeh, a muck diving mecca visited by thousands of divers. Just shows how knowing something exists can often be the key to more sightings.

Another fish that we have been searching for is Cirrhilabrus humanni, a fairy wrasse I discovered in 2010 off Pura Island and formally described by Dr. Gerry Allen in 2012. During our 2010 trip, I only saw the one male with a harem of many females so we were keen to know more about its range. This time our friend, Dr. Richard Smith, was the first to find one. Alerted to its presence by Richard, we found a couple more on the dive site off Alor. Richard’s wonderful shot is posted on his site, Oceanrealmimages.com.

I have seen many Midas Blennies, but never one in its courting colors. The banded pattern caught my attention but it took a while to realize which blenny it was because it was so large. I pestered Ned until he went back with me to take photos. One shallow outcropping sported a highly motivated population of at least eight males. 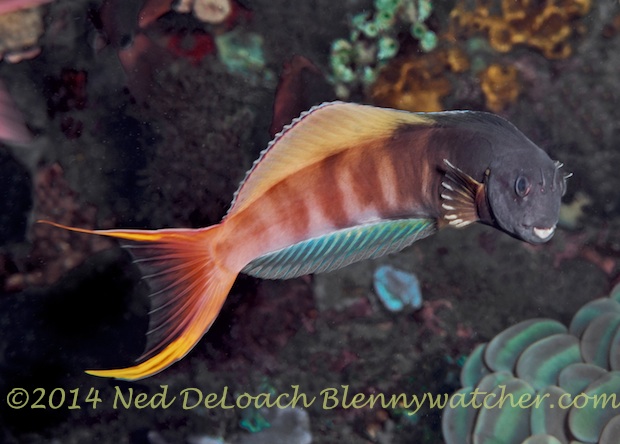 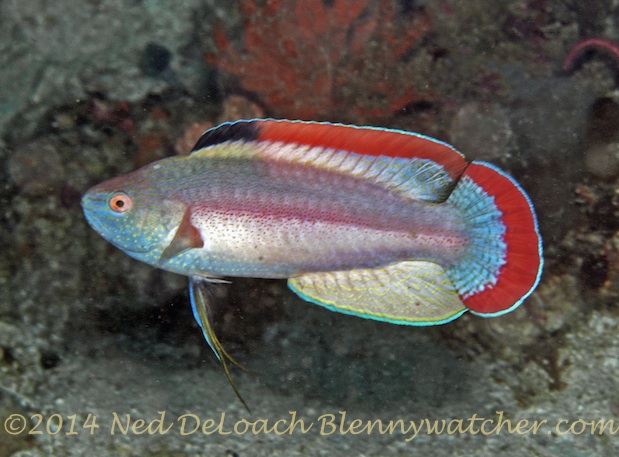 I found this stunner, a flasher wrasse (possibly undescribed), on a late afternoon dive and finally got the attention of Ned, our guide Yann and our friend Dave Dempsey, who were equally impressed! We were able to return the next day so everyone else could see these beauties. 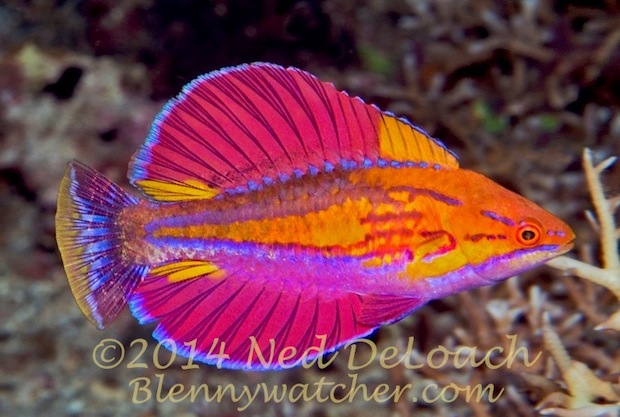 Night dives almost always yield fabulous creatures like this bumblebee shrimp perched on a brightly colored sea apple. Bumblebee shrimp feed on the tube feet of echinoderms, which is why we often find them on sea cucumbers and urchins. 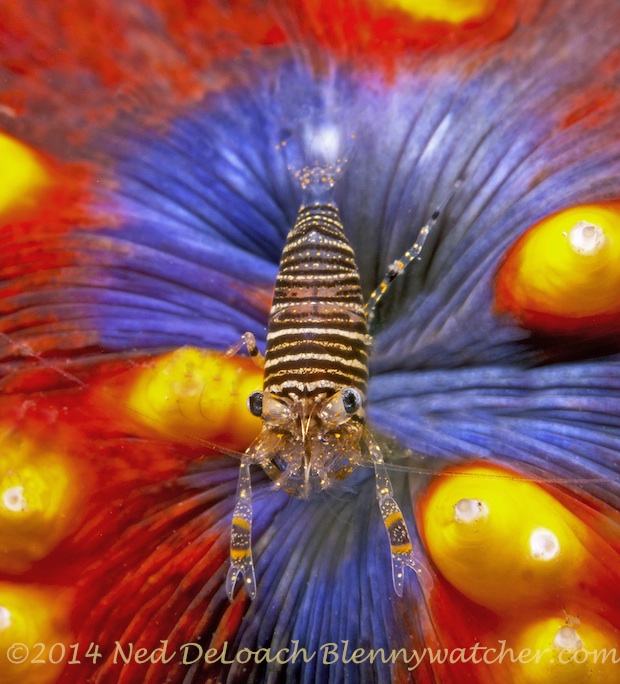 You can get an idea of how small this Bobtail squid is by comparing it to the shrimp it is holding. Ned shot this photo as the squid was capturing its dinner. 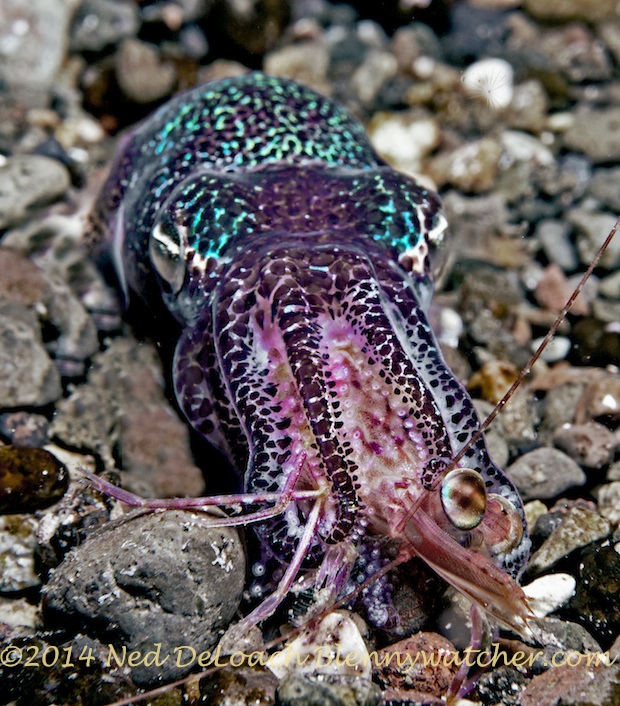 Who can resist a teddy bear? During a mucky night dive, Ned found this Teddy Bear Crab out bimbling around. I touched it – couldn’t resist – it was so soft. 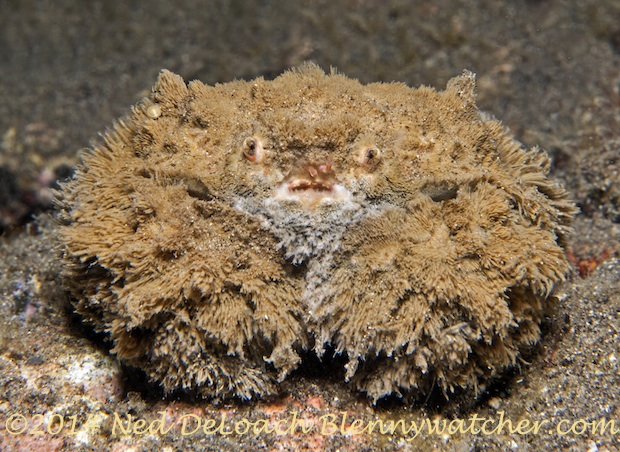 It is hard to believe that this tiny Pinnate Batfish grows up to be a large, rather nondescript silver-gray fish. 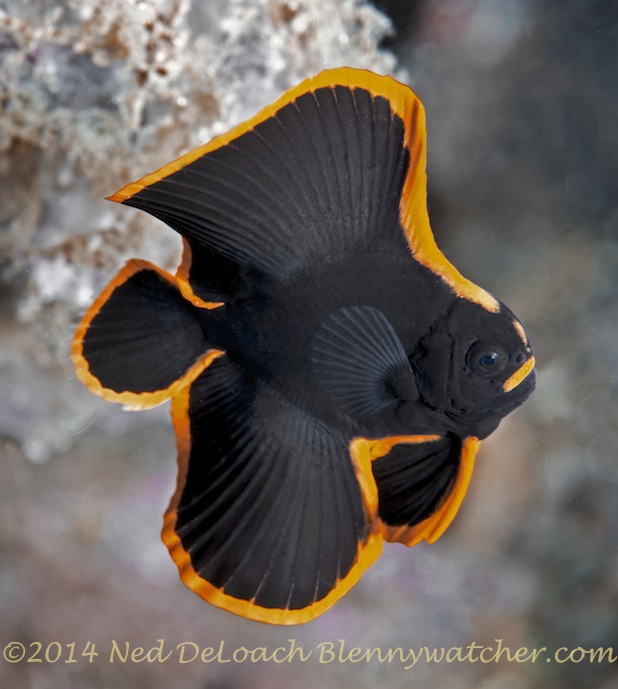 This cuttlefish was not impressed with Ned and his camera. Here, it exhibits what I think is a threat display. 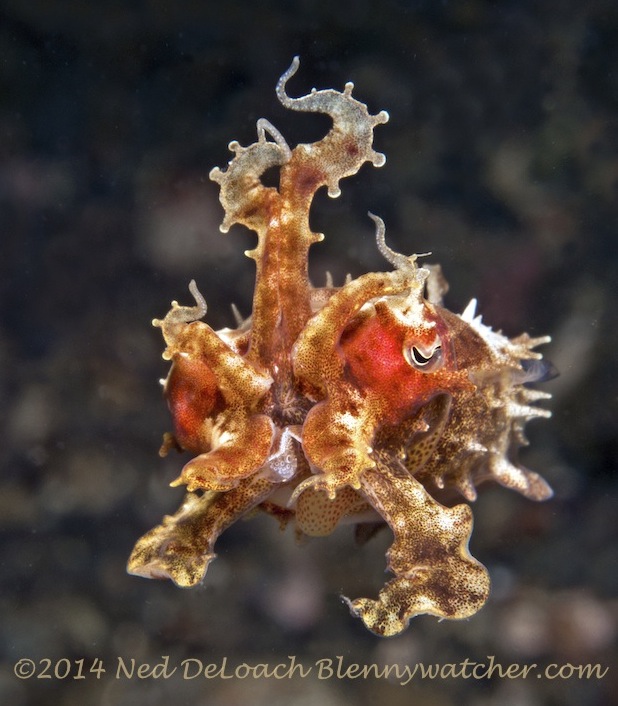 It isn’t uncommon to see Fire Dartfish singly or in pairs, but just outside of Banda, I found a group of almost 20! True to their name, they darted into their holes when we approached but Ned caught a respectable number in his shot. 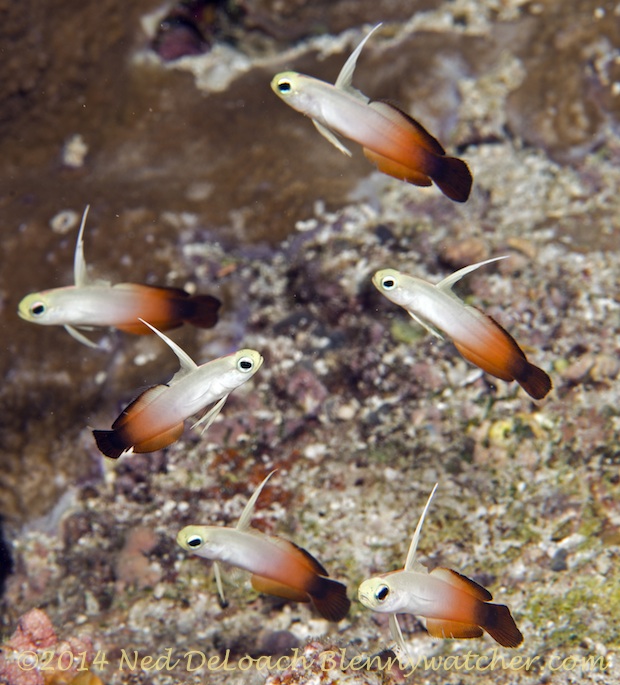 We close with happy bees of Banda – we had a lovely morning walking tour of a nutmeg plantation and fort on Banda Neira. 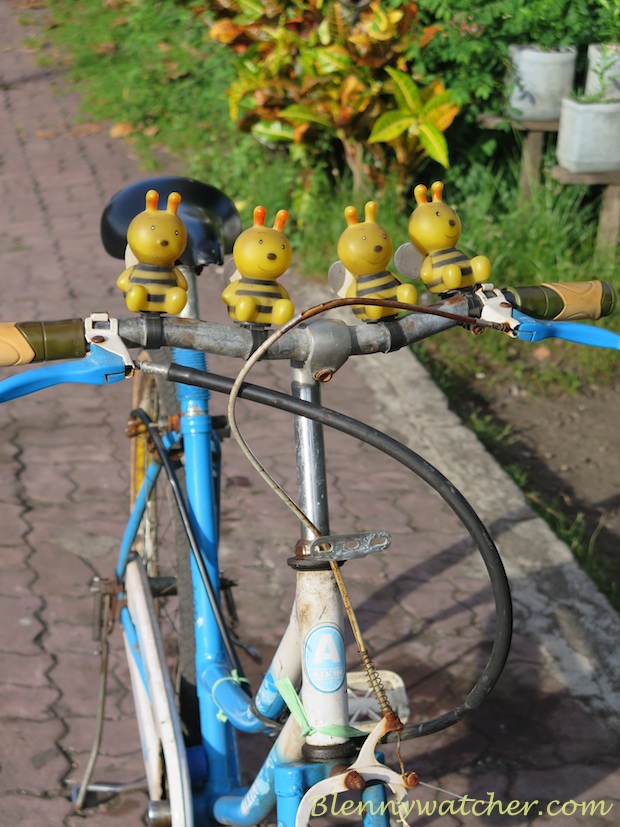