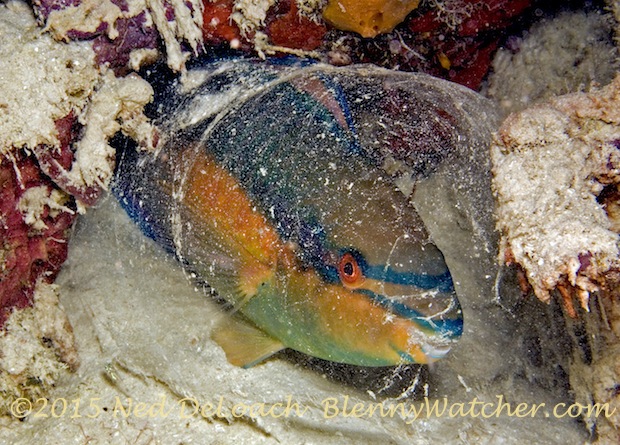 Recently, during a get-together of diver friends, the subject of parrotfish cocoons came up – I don’t remember why – and surprisingly, several said they had never seen a parrotfish sleeping in a mucous cocoon. After thinking about it, Ned and I realized that in all the hundreds of night dives we’d made, we had only seen it maybe a half dozen times. We encountered it for the first time in the mid-90s off Key Largo while waiting for the coral to spawn. We didn’t see the coral spawn that night, but the parrotfish cocoon made our dive. Mucus, secreted from a gland below the operculum, enveloped the sleeping fish in a protective bubble. And until about four years ago, all I knew about this phenomenon was what was taught when I first started night diving: that the mucous cocoon prevented attacks from nighttime predators like moray eels, by masking the scent of the sleeping fish. That theory was proposed in the 1950s by the scientist (H.E. Winn) who originally described the mucous cocoon of parrotfishes.

In November 2010, marine researchers from the University of Queensland published their findings that proposed another theory behind the mystery of the fishy cocoons: the nighttime covering provides protections from blood-sucking parasites. In tests, when exposed to parasites, 95% of the fish not protected by cocoons were attacked while only 10% of those in cocoons were. They point out that this theory doesn’t have to be mutually exclusive with the moray eel predator theory.

Parrotfishes and some species in the related wrasse family sleep at night by bedding down directly on the sand or in holes in the reef, making them ideal targets for parasites that would have a more difficult time attaching to a swimming fish. Although we’ve only seen parrotfishes in cocoons, wrasses like the Bluestreak Cleaner Wrasse (Labroides dimidiatus) and some in the genus Pseudocheilinus have been observed sleeping in mucous cocoons both in the wild and in aquariums.

I have posted a short video on our Blennywatcher YouTube channel or you can watch it below. (Note: We originally wrote about this in our June 2011 Critter Hunt column in Scuba Diving Magazine).