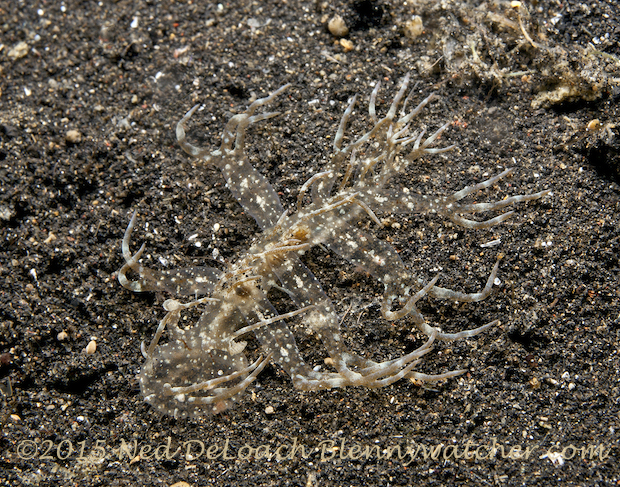 In May 2012, Ned returned from a dive in Lembeh, Indonesia, with images of this tiny, clear Melibe nudibranch. He had been working the very shallow black sand shelf with our guide, while I was below them at 60 feet, taking video of another, much larger species of Melibe. I was pretty satisfied with my Melibe -until I saw the image of his, which happened to be a species neither of us had ever seen before. I managed to talk them into going back to the dive site the next day on the off chance that we might find it again. Ned and our guide valiantly hunted for about 15 minutes before they abandoned me to my hopeless quest but I stayed with it for 90 minutes with no luck. Ned sent his photo off to Dr. Terry Gosliner who identified it as Melibe megaceras, a species he had described in 1987.

May 2014 found us back in Lembeh Strait and on this particular dive, over on the opposite side of the bay at a famed site called Hairball. Our goal was a pair of Ambon Scorpionfish known to be in the area but another boat was positioned where we wanted to drop, so we opted for a fairly bare patch of shallow black sand nearby. Almost within a minute, our guide Man, motioned me over, pointing to the black sand, where I saw absolutely nothing. It took several iterations of the point-shrug-can’t see-show me again-pantomime before I realized that he had found another Melibe megaceras! It was so tiny (see in the video frame capture above how it sizes up to Man’s pointer) and clear but this time I could add one more Melibe to my life list! Video below: