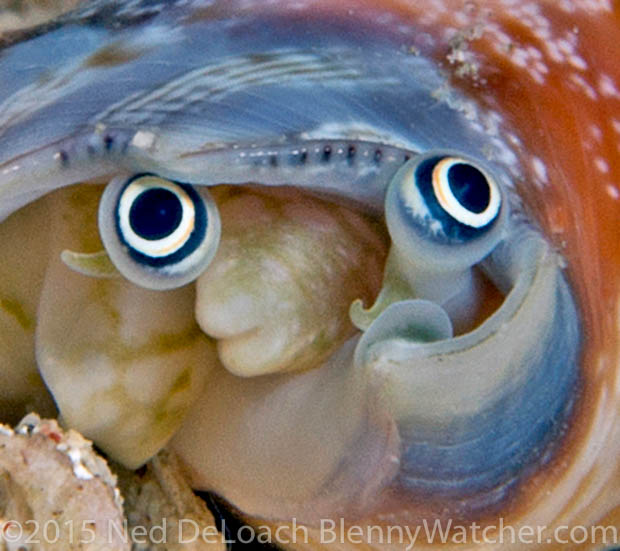 October 2015 ~ We are ashore in Sorong, Indonesia for 24 hours, between dive trips through Raja Ampat aboard the Dewi Nusantara dive boat. What a difference ten years makes! Our overnight stay in 2005 was in Sorong’s finest hotel (which shall remain nameless here), a friendly place with a lovely marble entrance…but that was about it. The rest of the building was a strange combination of musty, old rooms and unfinished stairwells (a plastic potted palm blocked the door to the out-of-service elevator). The smell of raw concrete and insecticide was memorable as was the 2-hour wait for meals. Ned just commented that “those were NOT the good ol’ days!” Here we sit today, in a brand new hotel, loading images to our blogs with a wireless Internet connection, from the comfort of air conditioned rooms. We’re a lot more comfortable but won’t have nearly the stories to tell! 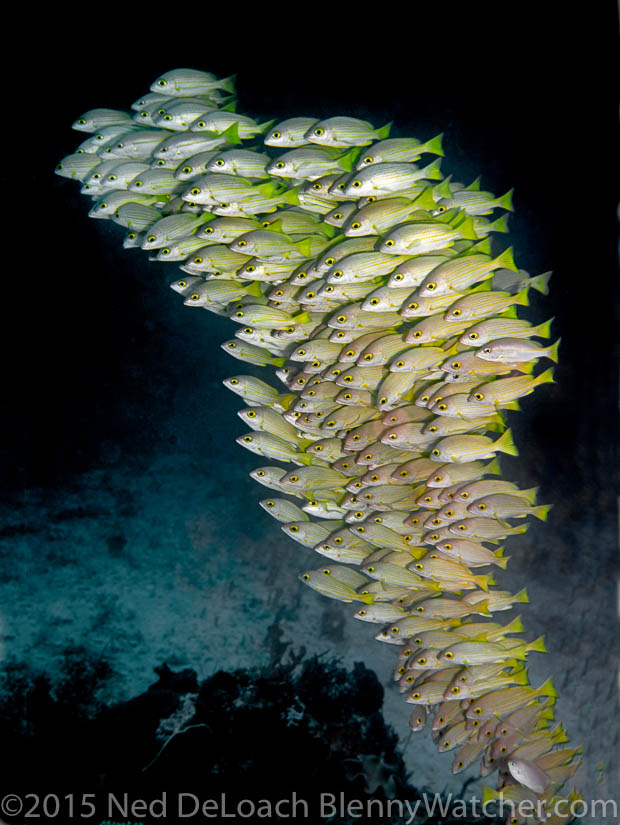 The south wind in Raja Ampat has been unseasonably strong for this time of year, forcing Wendy Brown, our cruise director, and the dive team to seek out protected dive sites on the north sides of the islands. They’ve managed to get us to some of the old favorites and tried a few new sites that were off the charts good. We had a couple of not-so-great dives too, but considering that the rough seas narrowed down the choices, we did all right.

A few years ago, I found a tiny 6-inch Wobbegong Shark that looked exactly like the 5 to 6 foot adults. After the dive, I lamented that I should have put my hand down next to it when I shot the video, to give some perspective of its size. This time, as soon as our dive guide, Yan, called us over to look at another little baby, he immediately put his hand next to it – he remembered!

On a night dive last week, I happened upon a large hermit crab holding onto a smaller one. I saw this behavior a few years ago in Lembeh Strait and the smaller crab turned out to be a female releasing hatching larvae. I was afraid if I got too close, she would stop, so I waited until it looked like most of the eggs had hatched before I moved close enough to zoom in. The whole thing lasted about 90 seconds before she moved off, the larger male chasing close behind:

Ever since he saw Dr. Richard Smith’s (Ocean Realm Images) photos of the shrimp that live in giant clams, Ned has wanted to see them for himself. This gave Yan and him a mission for the week – they searched for giant clams and if one was positioned in a way that they could kneel (no hovering for 70 minutes like Richard did to get his shot), they would wait for the fleeting moment that the shrimp appeared. They found a matched pair but a different species than the ones Richard shot, so the hunt continues.

This is one of Ned’s favorite shots of the week: an Irian Jaya Fairy Wrasse being cleaned by a cleaner wrasse. Fairy wrasses become very brightly colored and move very fast when they are courting females.  It is the oddest thing to see one stop suddenly to allow a cleaner wrasse to pick a parasite, then take off again in a split second:

Another cleaning behavior: a moray being cleaned by Scarlet Lady cleaning shrimp: 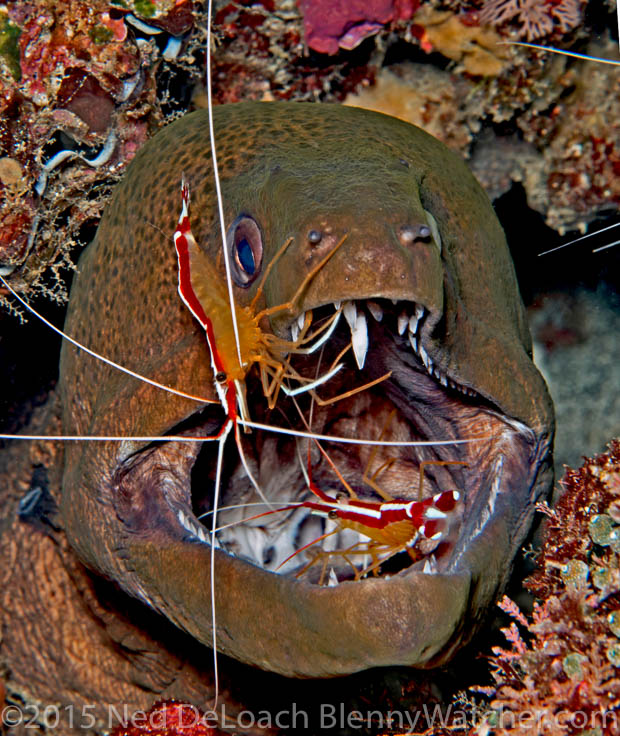 Found on a night dive, this was the largest Saron shrimp – about two inches long:

One of the prettiest dottybacks, a Firetail Dottyback: 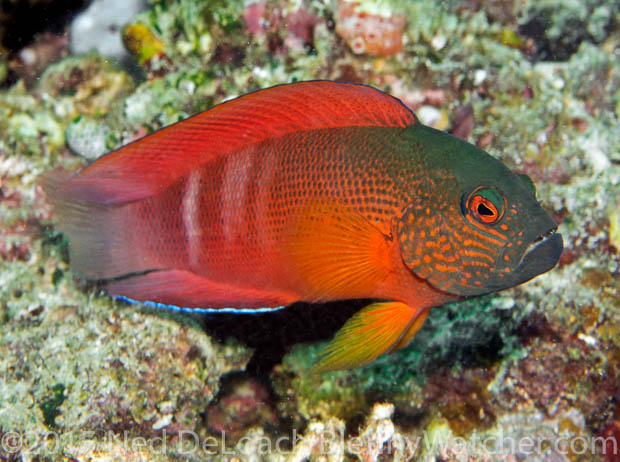 One of the first dives we ever made in Raja Ampat was on Cape Kri, one of the fishiest dive sites in the world. It was great to see the site ten years later – still amazing: 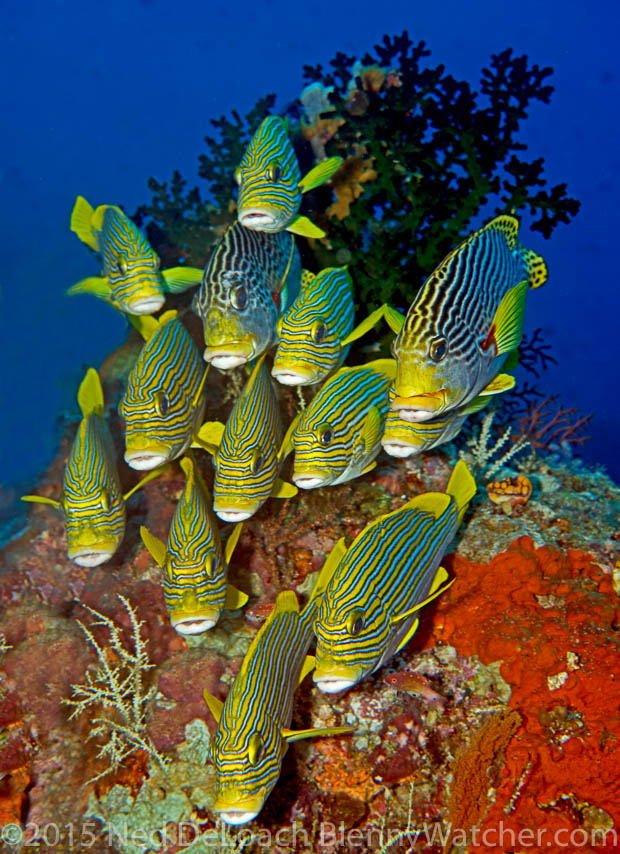 I’ve been obsessed with Convict Fish (Pholidichthys leucotaenia) for years and have spent hours watching and filming them. The very large adults are extremely shy, so it has always been difficult to get a good image. Ned spent about 30 minutes getting a shot of an adult as it was cleaning the burrow. The striped juveniles, pictured all around the adult, leave the burrow during the day to pick plankton, but the adults never leave the burrow:

We’ll be boarding the boat again in a few hours for another trip. I’ll post our favorite blenny shots when we return to shore in two weeks.