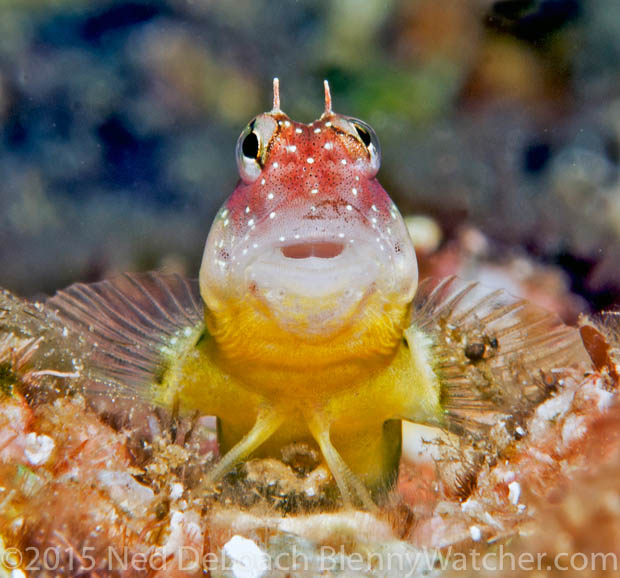 Indonesia, October 2015 ~ Here is our latest Raja Ampat Blenny Portfolio. We just returned from a dive trip aboard the Dewi Nusantara in Raja Ampat in eastern Indonesia, where we photographed some old favorites and added a few species to our life lists, like the very cool Throatspot Blenny, Nannosalarias nativitatus (above) and the Spotted and Barred Blenny, Mimoblennius atrocinctus (below). These blennies like areas of high current and/or surge and we found them at depths ranging from 3 to 15 meters. 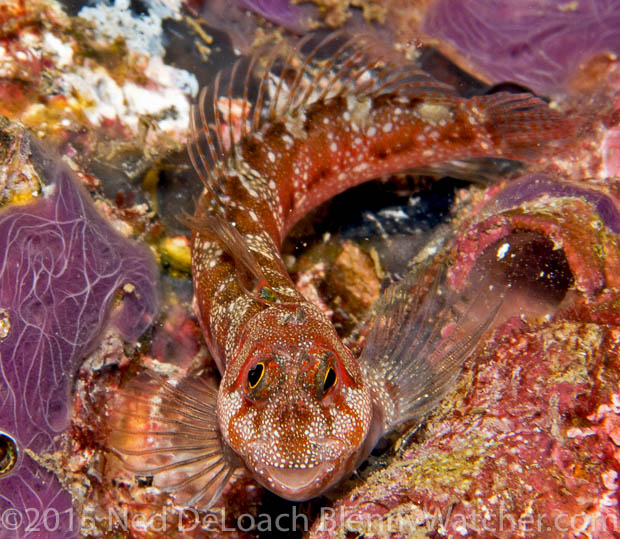 After our guide Yan found the Spotted and Barred Blenny, we decided to get out of our comfort zone and spend most of a dive in raging current and strong surge up on the tops of bommies at a depth of 1 to 2 meters – that’s where some of these little cuties make their homes.  The lead photo in this post is a Throatspot Blenny and we didn’t really understand the common name until Ned shot the one below and we could really see the spot: 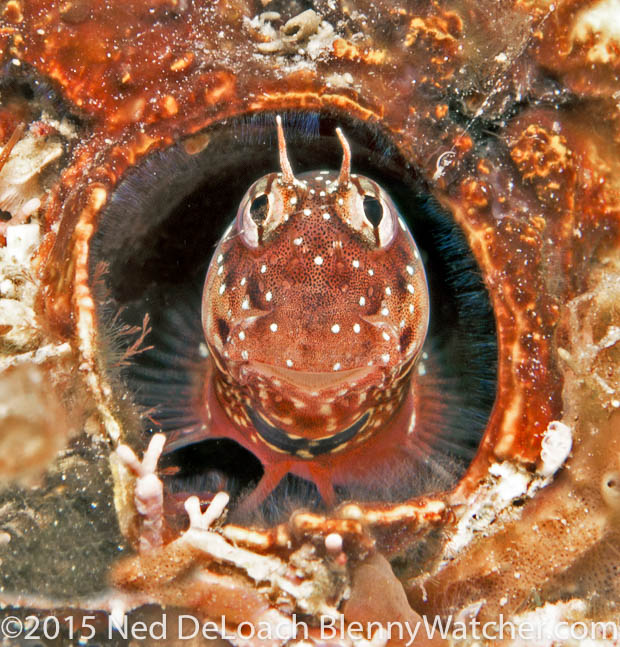 On a morning dive near the Equator islands, I spotted a pair of courting Largemouth Triplefins, Ucla xenogrammus. The female is rather nondescript but the male, in its courting colors is quite remarkable: 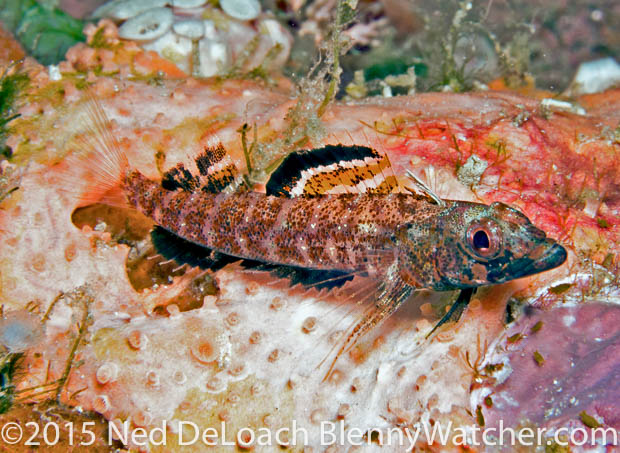 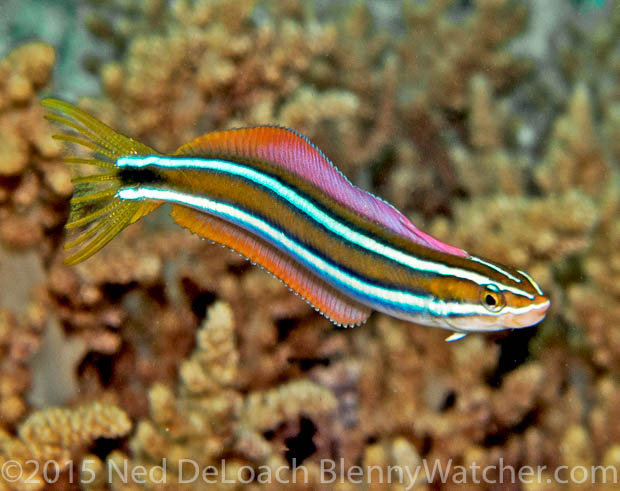 When I first saw this group of Striped Fangblennies, Meiacanthus grammistes, I thought there might be some courtship going on but after following them for a while, it looks like they were just being social. We don’t often see them in tight groups like this: 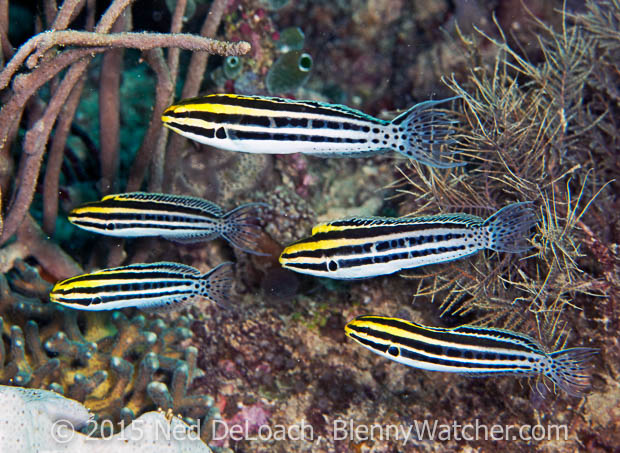 I found this very large (5 inches/ 12.5 cm) Ceram blenny, Salarias ceramensis, at Pulau Dayang near Batanta in only one meter of water. It took most of a dive for it to get used to us so Ned could take this shot. I guess a blenny doesn’t get to be that big unless it is very wary or very lucky. While we were waiting for Ned to get the shot, Yan and I scrutinized every bit of rubble nearby and Yan found two very tiny blennies of the same species – they were so cute –  only an inch long. 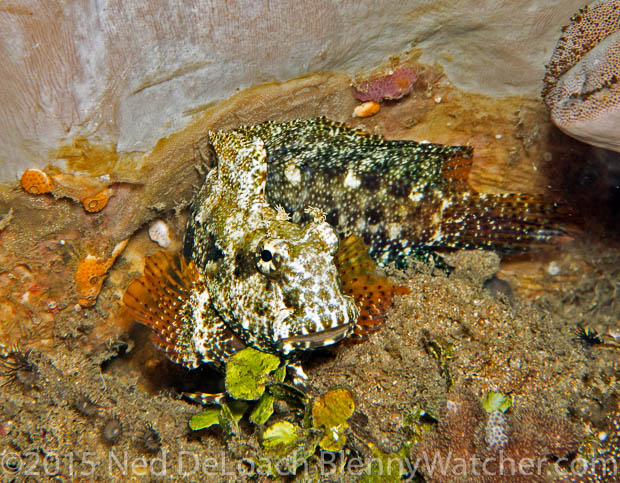 The very beautiful and animated Tailspot Coralblenny, Ecsenius stigmatura. We saw so many of these on one dive site in Wofo that we named the site, 10,000 Tailspots: 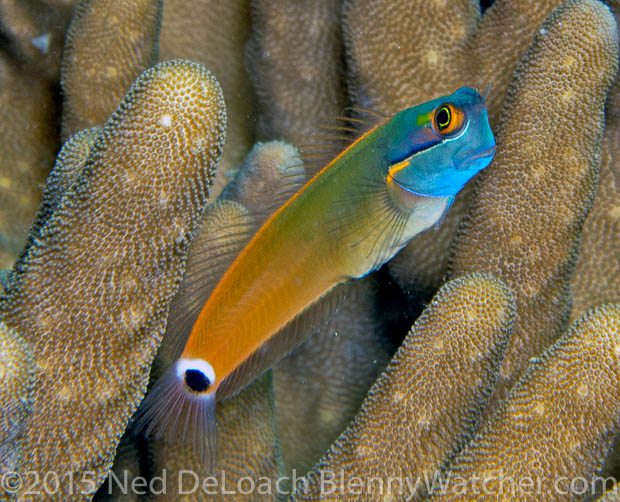 It was fun to see an Earred Blenny, Cirripectes auritus. We saw this same species in Japan this past summer: 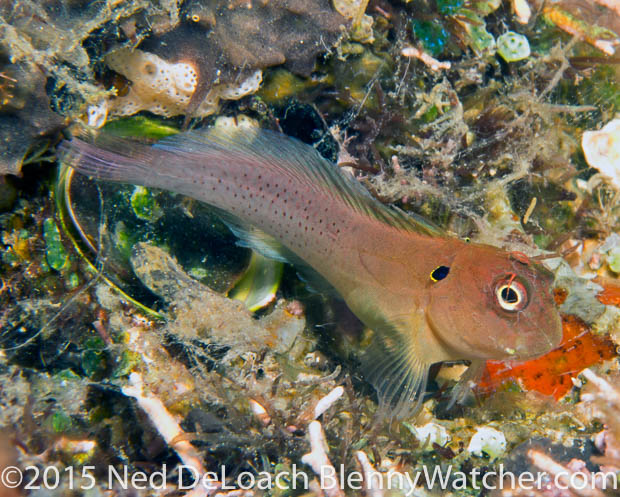 The Rhinoceros Triplefin, Helcogramma rhinoceros, has a very descriptive name: 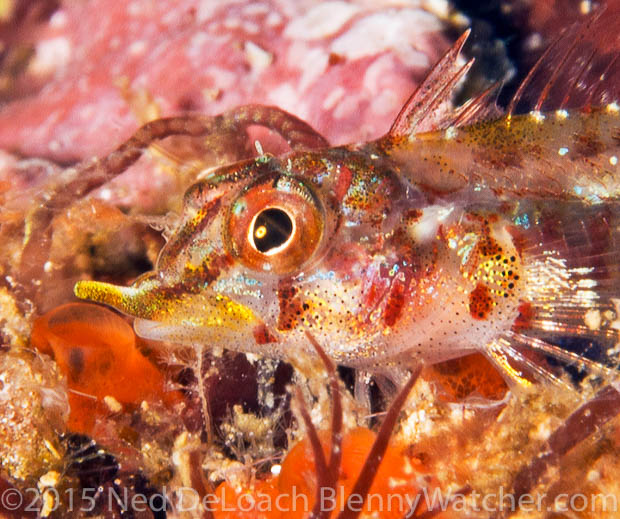 Our friend Lynne Van Dok found this outrageous Triplespot Blenny, Crossosalarias macrospilus, on the famous Bird Wall in Aljui Bay, Waigeo. This is not a particularly rare blenny but this one is one of the most beautiful ones we’ve seen this year: 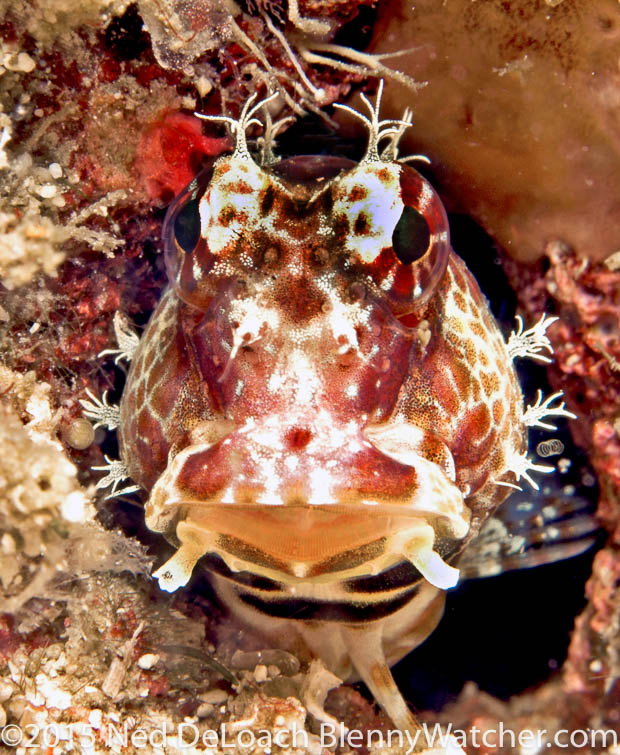 We close with one of Ned’s favorite blennies, the Redspotted Blenny, Blenniella chrysospilos. Just like the ones we shot in Fiji earlier this year, this blenny was high up on a shallow bommie in an impossible surge: