Little Fish with the Hollywood Lips 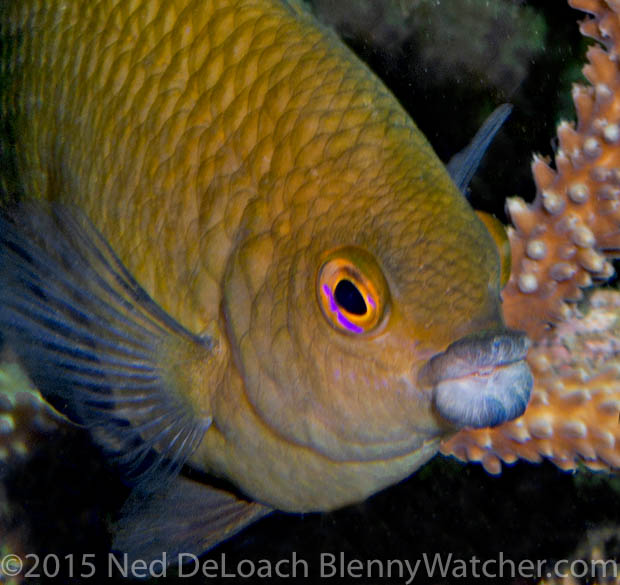 November 2015, Lembeh Strait, Indonesia ~ Cheiloprion labiatus, the Big-lip Damsel, fascinates me. How have we managed to dive throughout its range for so long without ever noticing it? Last month, our friend Janet Eyre noted several during a REEF fish survey in Lembeh Strait and pointed them out. Damselfishes are ubiquitous on the reefs we visit but the ones that usually catch my eye are brightly colored juveniles. By the time the Big-lip Damsel develops its Hollywood lips, it is drab brown; definitely not flashy.

Why a fish would evolve with such an odd-looking feature made sense when we learned what it eats. While some damsels pick plankton and others feed on algae and/or benthic invertebrates, the Big-lip Damsel feeds on the tentacles of the polyps of Acropora corals. Each tiny, fleshy tentacle of this stony coral is surrounded by the sharp, skeletal part of the corallite – no problem for the Big-lip Damsel.

Ensconced in the Acropora thickets it feeds upon, it really has no reason to leave the protection of the coral, making it easy to miss but once we had a search image for the fish, we were able to takes others back to see them. The Big-lip Damsel has a big range: from Sri Lanka to Vanuatu and from the Philippines down to Australia, so we’ve had plenty of chances to see it but it was just “off our radar” – no telling what other fascinating animals we’re overlooking. Here’s some video: