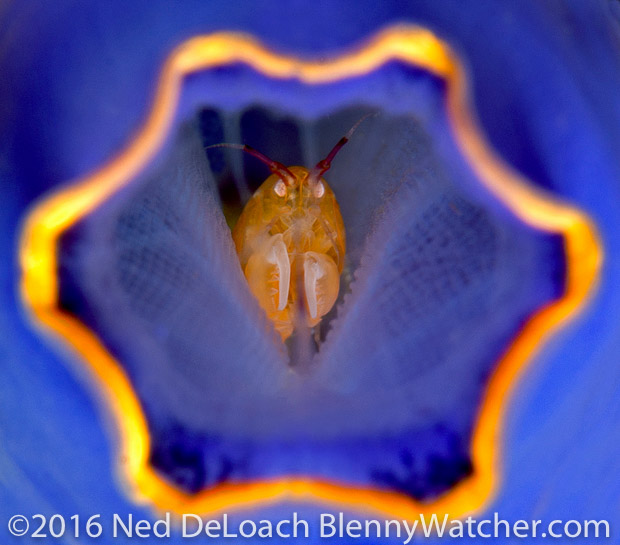 Philippines: March, 2016 ~  Here is Ned’s Anilao Portfolio of some of his favorite photos from our recent stay at Aiyanar Beach and Dive Resort. Last year, when we visited in late spring with a group, we asked our dive guide, Kim Manzano, when his favorite season was for diving there. Being the good dive diplomat, he wouldn’t commit to a best time but advised that we’d likely see different things if we came when the water was a little cooler. So this year, we added a 12-day visit to Anilao onto a long-planned visit to Indonesia. Three of us chartered a private boat and two guides, Kim and another free-lance guide, Hydee Bantugon, who showed us quite a few interesting animals, including a few new ones for our life lists.

I’m handing this off to Ned, who has added the comments to accompany his images:

You can always expect the unexpected underwater. Take for instance the leading image (above) of a tiny amphipod living symbiotically deep inside a Blue Bell Tunicate.

And then there is the Blue Button Chondrophore , the size of a saucer, floating by the dive boat. Although the otherworldly life form appears and acts much like a jellyfish, it is actually a colony of hydroids that uses stinging cells to capture drifting zooplankton: 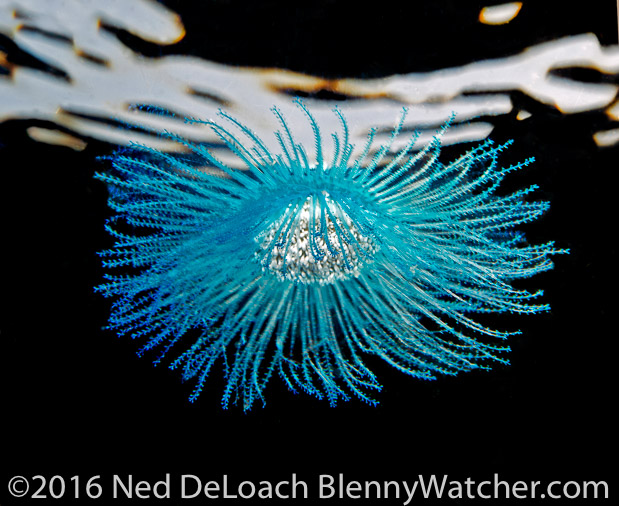 Who would think that a blenny could be as long and slender as a snake? The Hairytail or Snake Blenny (Xiphasia setifer), as it is commonly known, spends much of its time with only its head and a few inches of its two-foot-long body extending from a tube in the sand: 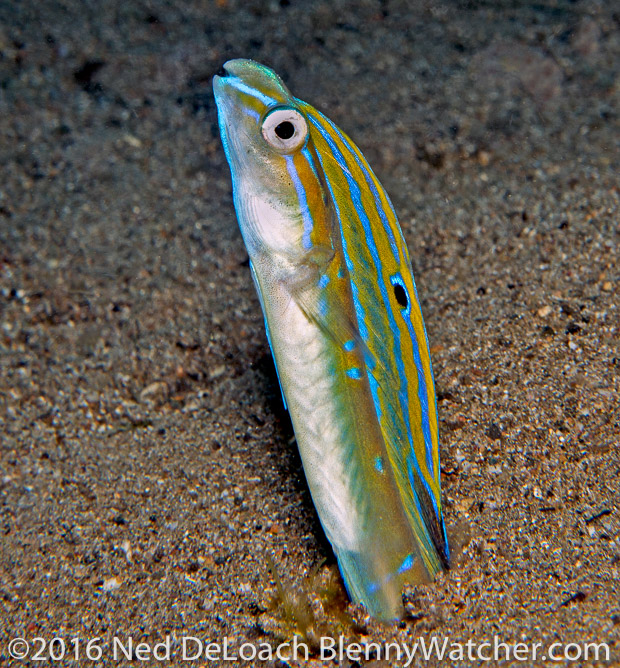 It just happened to be breeding time for tiny Ornate Gobies in Anilao. Annually, the tiny waifs settle to sandy sea floors, somehow find a mate and set up housekeeping beneath shells or whatever bottom debris they can find. For the next two weeks or so the cute little fish turn into breeding machines before vanishing as suddenly as they arrive. An egg-laden female peers out from the neck of a discarded beer bottle: 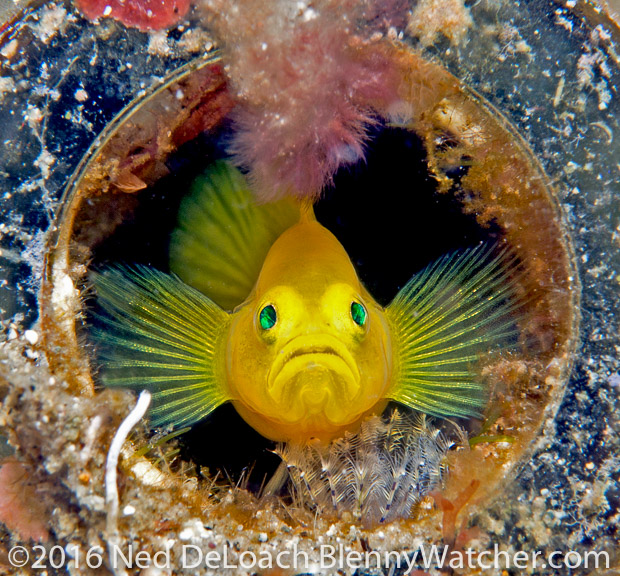 A male Golden Goby tends a clutch of eggs laid on the underside of a bivalve shell. From the looks of things, the dark-eyed embryos are ready to hatch sometime after sunset: 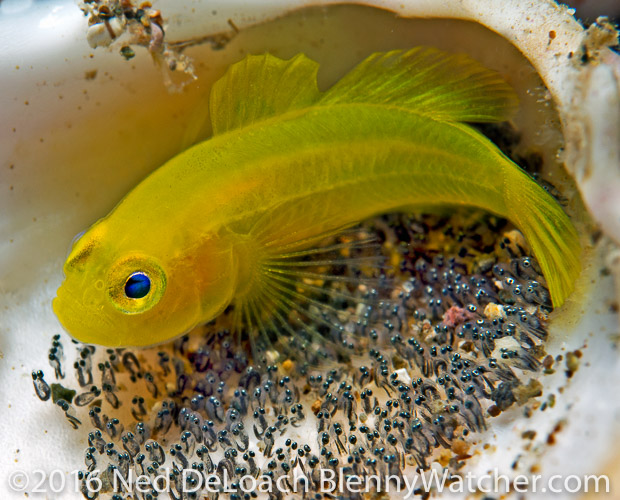 Our good friends, William Tan and Ben Sarinda, showed us this feeding coral gall crab. Found living inside a depression in living coral, it wears its brood of eggs on the outside of its carapace: 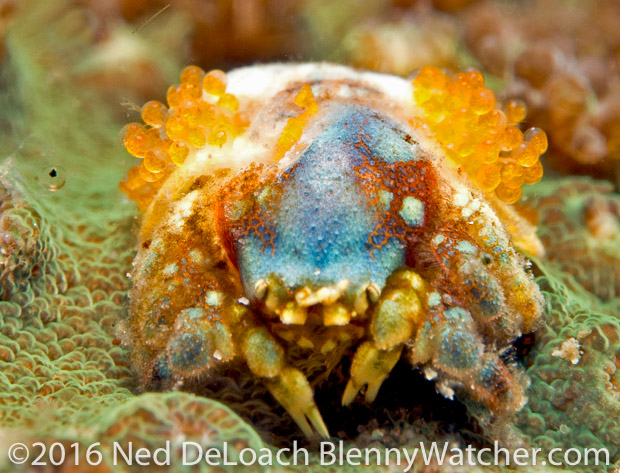 Anilao is famed for its nudibranchs. This scientifically undescribed Thecacera has only been reported from local waters: 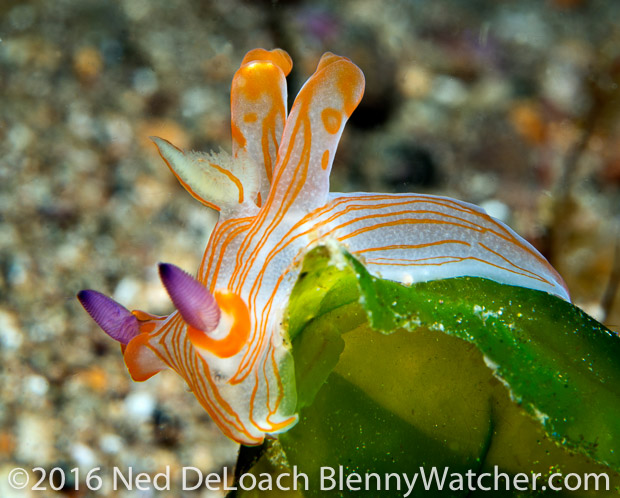 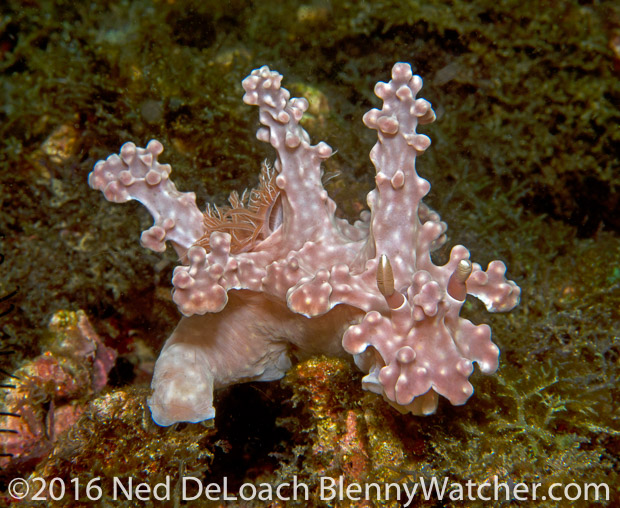 Nothing more than a wisp of delicate, translucent lobes, this undescribed Cyerce nudibranch dines on algae: 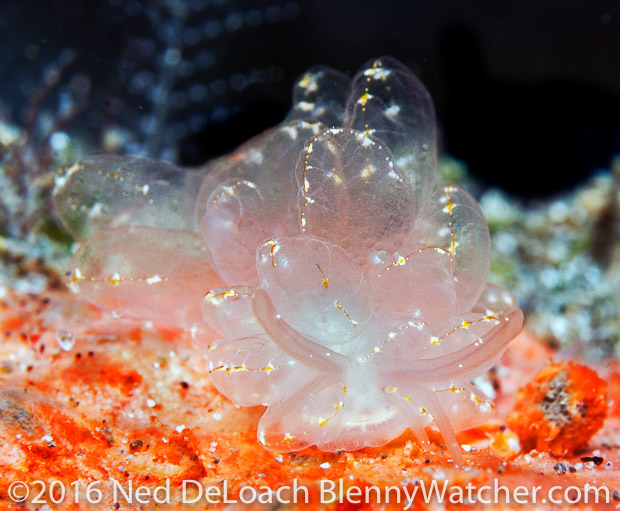 An undescribed Facelinid nudibranch crawls through a bed of orange tunicates: 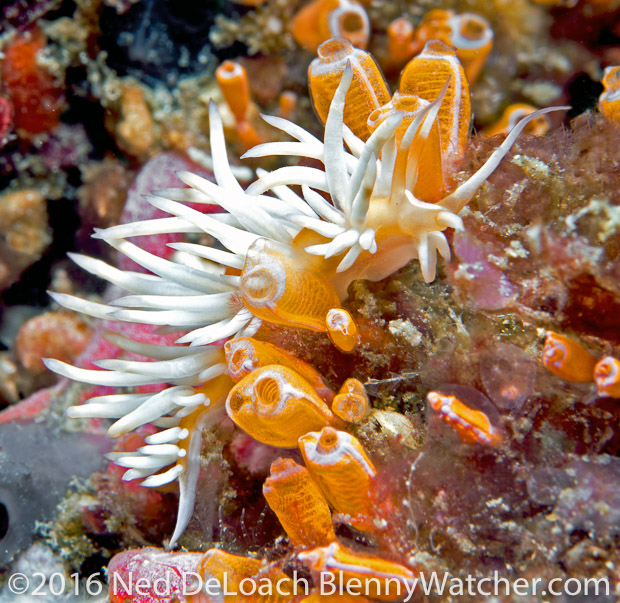 Flasher wrasses are not too common on Anilao’s reefs, but the ones they have are true delights. This two-inch male Angular Flasherwrasse (Paracheilinus angulatus) can only be found in the Philippines and neighboring Brunei: 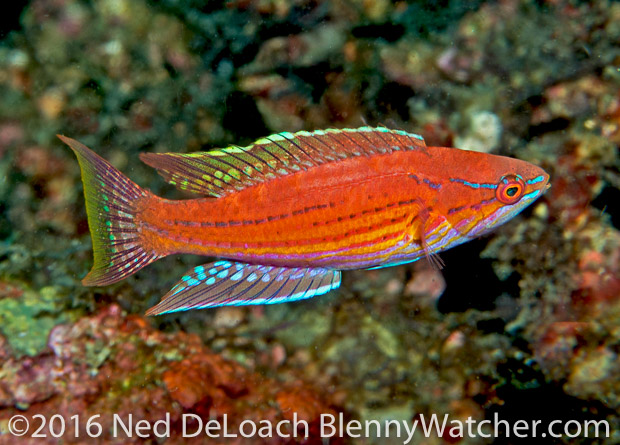 Although fairly common throughout the Indo-Pacific flasherwrasses are easy to overlook. For much of the day, the two-inch males slink around algae or rubble slopes below 50 feet with their colors muted and fins collapsed. All that changes late in the afternoon for 20 action-packed minutes when male flashers go into their reproductive mode. A Scarlet-fin Flasherwrasse (Paracheilinus lineopunctatus) shows off his filamented dorsal fin for the ladies: 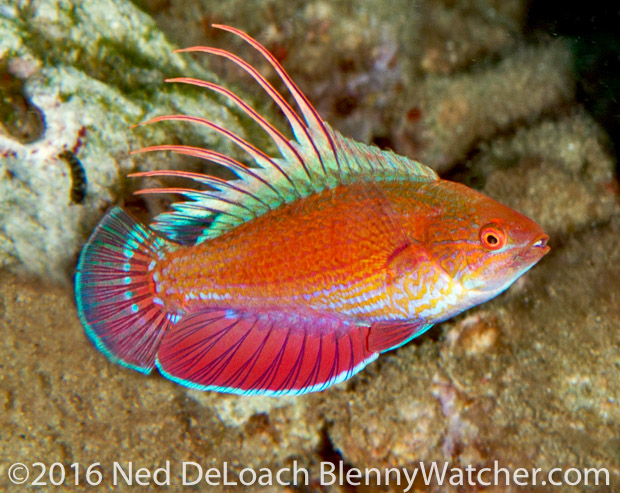 Seconds later the same Scarlet-fin streaks past his harem of females with his most exuberant courtship colors ablaze: 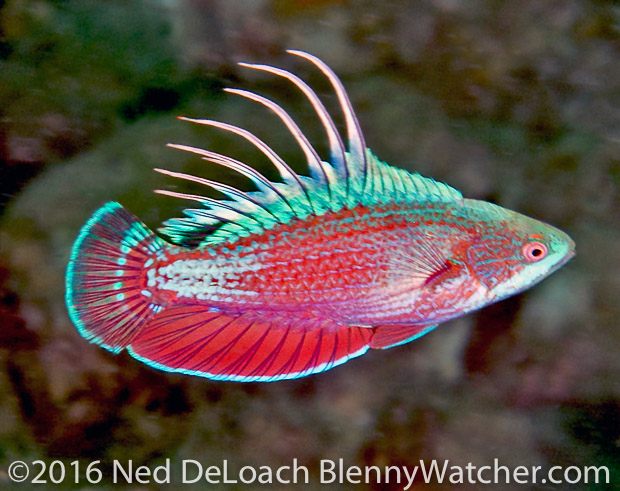 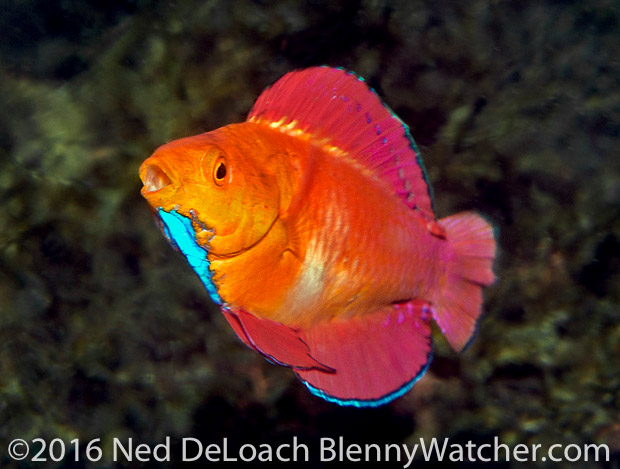 A resplendent Peacock Fairy Wrasse lives up to his terrestrial namesake: 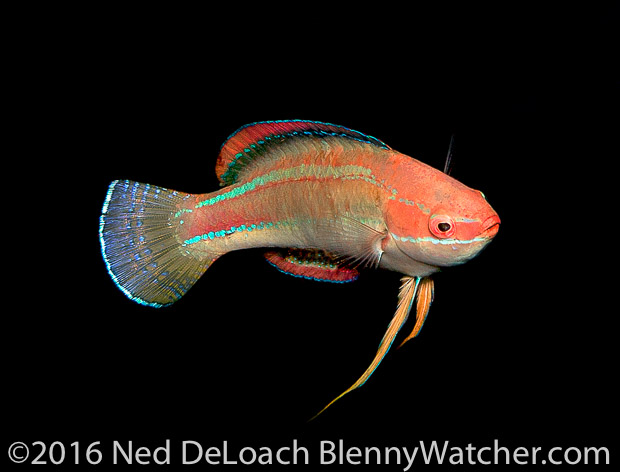 We close with a mantis shrimp, that paused long enough to give us a look, before scurrying off to continue hunting: 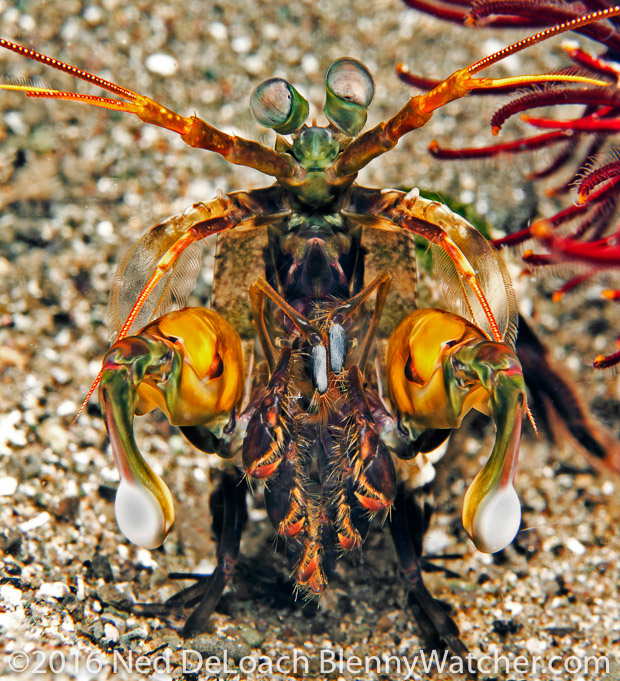