April 2016 ~ We’re on shore in Kaimana, a small port in eastern Indonesia, awaiting reprovisioning of our dive boat, Dewi Nusantara, before we head back to Triton Bay for another 11 days of diving. We woke yesterday morning to a splendid sunrise, seven hornbills overhead and a feeling that our last dives of this first trip were going to be special.

And they were. The little pipefish above is one we have wanted to see for a long time. It belongs to the genus Bulbonaricus but I’m not sure which species – brauni or davaoensis. About two years ago, I decided to get serious about trying to find it and started asking our guides to look in its habitat, Galaxea coral. But until this morning, the cryptic little fish remained elusive. Last week, I asked our guide Yan Alfian to look for it and of course he found it. Armed with the search image, Richard Smith found more on the second dive, so no telling how many we’ll find next week! This is my favorite of the several shots Ned managed to get of the very cryptic, toothpick-sized fish.

Another Triton Bay surprise was this Sailfin Anthias, Rabaulichthys altipinnis, normally found at much deeper depths.  We were after flasher wrasses at Flasher Beach, timing our dive for late afternoon when the flashers are courting and spawning. Mixed in with all the flasher wrasses were these fish. It was quite a frenetic scene, flashers flashing, the anthias flaring their dorsal fins and everything chasing everything. 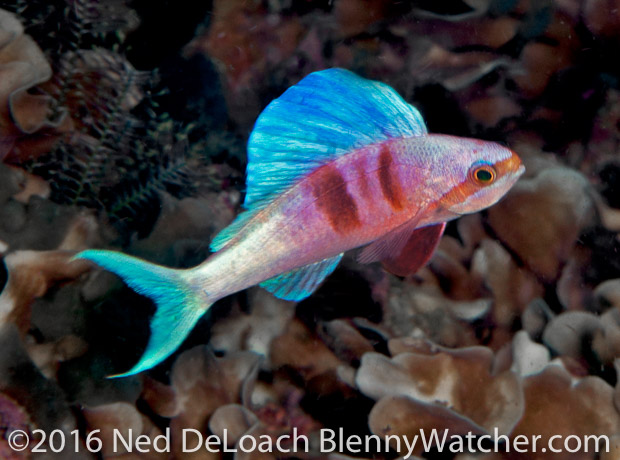 We’re heading back out of Internet range soon, but will be back in a couple of weeks with more images from Triton Bay.