April 2016 ~ Here’s another one from Triton Bay – we believe it is another species of Bulbonaricus pipefish! It was found in Galaxea coral by our dive guide, Yan Alfian. I think it is Bulbonaricus brucei, but will have to get confirmation once we are home. Unfortunately, I wasn’t anywhere nearby to shoot video, but Ned got the photo and the search continues until I can see one for myself.

In our post two weeks ago, I shared Ned’s photo of a little Bulbonaricus pipefish from Triton Bay, Indonesia that Yan found in a small colony of Galaxea coral. I had asked Yan to look for the pipefish whenever he saw that species of coral and it didn’t take him long to find one. Ned sent his photo to Dr. Gerry Allen who identified it as Bulbonaricus brauni. The dive team on our boat, Dewi Nusantara, found quite a few more over the past 12 days, not only in Triton Bay but off Tumbu Tumbu, the Banda Islands and this morning, in Ambon Harbor! We had almost stopped looking for them when Ned and Yan returned to the boat with photos of the “new” pipefish and the hunt started all over again.

These pipefishes are really small, about the size of a very long toothpick. They are very difficult to spot when the polyps of the corallites are extended (usually when the current was running and carrying nutrients to the feeding corals). When the polyps are not extended, the pipefishes are a little easier to spot. Once we had a search image for the tiny little white heads winding through the coral maze, Wendy Brown and I started finding them on our own and by the time we reached Ambon, almost everyone in our group could find them. A dive light helps  reveal their slender dark bodies and when we sat with them long enough, we observed them poking their heads out occasionally. 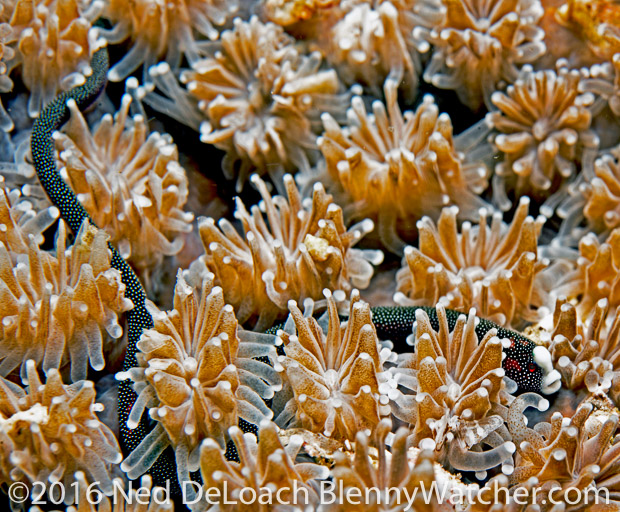 Seeing them was not usually the problem; finding one in a coral colony that was in a good enough position for me to set up my tripod before the fish moved was tougher.  During a one-hour dive, I could count on seeing them in a good position about every ten minutes. Patience and time was the ticket. Video to follow when we have a strong enough Internet connection.