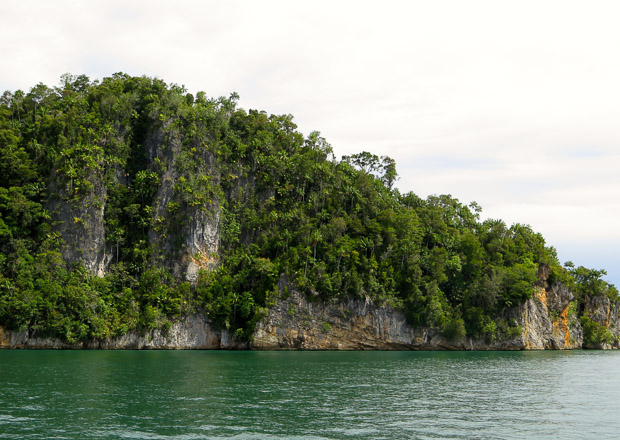 April 2016 ~ It had been nearly a decade since we last sailed into Triton Bay—an unspoiled, mountain-lined piece of paradise in far eastern Indonesia. On that 2007 trip, we departed out of Sorong and dived our way south and along the Fak-Fak peninsula before arriving in the fabled bay. This time, we sailed from Ambon to Triton Bay aboard the Dewi Nusantara, just one of several live-aboards that have recently added the remote destination back on their itinerary. Diving along the way, it took us three days to reach the area around Aiduma Island, home to the most popular dive sites. Today there is even the option of staying at a lovely land-based resort, Triton Bay Divers, in one of their six classic island bungalows nestled between a lovely beach and jungle cliffs.  On the edge of known diving, they are an hour and half by speedboat from the nearest airport at Kaimana in West Papua. The conservation-minded founders have partnered with local landowners with a goal of sustainability and long term success for all involved.

Why such a long delay between visits? There weren’t many boats venturing into the area. Shortly after our 2007 trip, we heard that Conservation International requested a hiatus of diving activities while the organization helped the local government establish a sustainable development plan for the remote region, taking into account the well-being of nature and local inhabitants who are unused to visitors. CI’s efforts have been slow, through and rewarding. Following a biodiversity assessment and extended consultations with local residents, much of the area’s species-rich coastal waters have become part of an ecologically connected network of marine protected areas (MPAs) safeguarding just under 400,000 square miles of the West Papua region including Raja Ampat to the north.

Happily little has changed above or below the water during the nine years between our visits. The mist-laced mountain forest still plunges, uncut and unfarmed, down to the water’s edge. And beneath the surface fish swirl in abundance among soft coral gardens growing in profusion along the boulder-strewn coastline. The inner bay contains few extensive stony coral reefs; and because of the mountainous terrain, run-off from tropical rains, heaviest between May and October, can limit visibility from time to time. During our stay in April, rains were infrequent and mostly came in quick downpours during the night. Water clarity ranged from 20 to 60 feet deep inside the bay, but increased to more than 100 feet around the ocean swept islands guarding the entrance.

In our previous two posts, we shared our excitement over seeing two species of Bulbonaricus pipefishes – new additions to our life lists. Here we share a selection from my Ambon to Triton Bay portfolio and we resolve to not let another nine years pass before we return to Triton Bay.

Sexual selection in action, a male Moyer’s Dragonet shows off his ornate dorsal fin while courting late in the afternoon: 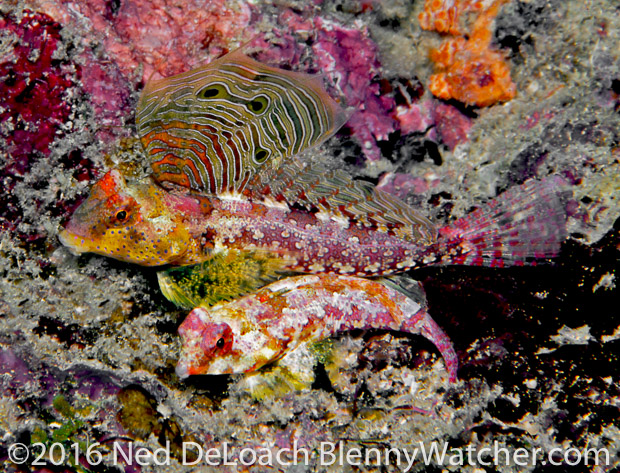 Just after sunset the pair lifts off the bottom for a short spawning rise: 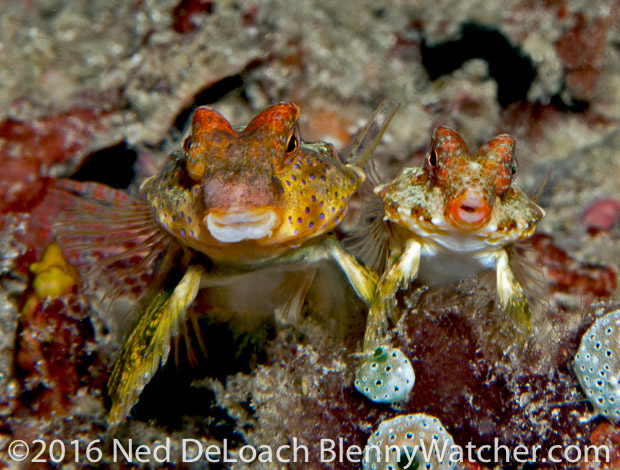 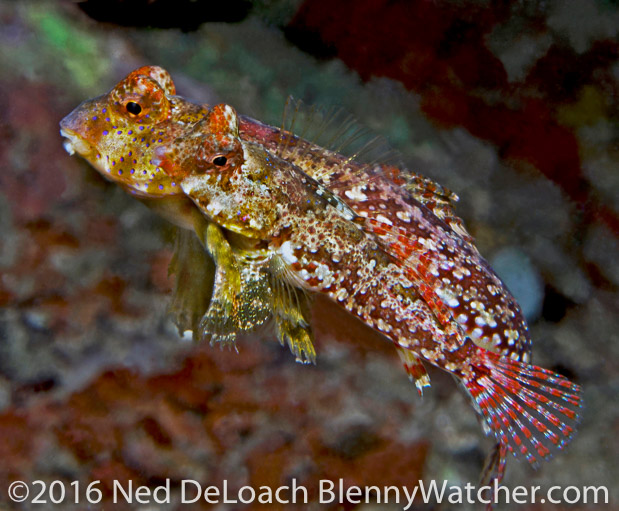 The Nursalim Flasherwrasse is one of the most common of three genus members, common know as flashers (Parachelinus), inhabiting the Bay. In preparation for our trip, Anna read an article by Dr. Allen on the Bird’s Head Seascape blog, describing Flasher Beach, a world-class site for observing these beautiful fish at their best. Next it became the job of our cruise director, Wendy Brown, to organize our itinerary so we could visit Flasher Beach as often as possible during late afternoon when the fish, in this case numbering in the thousands, display their brightest colors and oversized fins during reproductive rituals. In all our years of flasher watching we have never seen a better show. 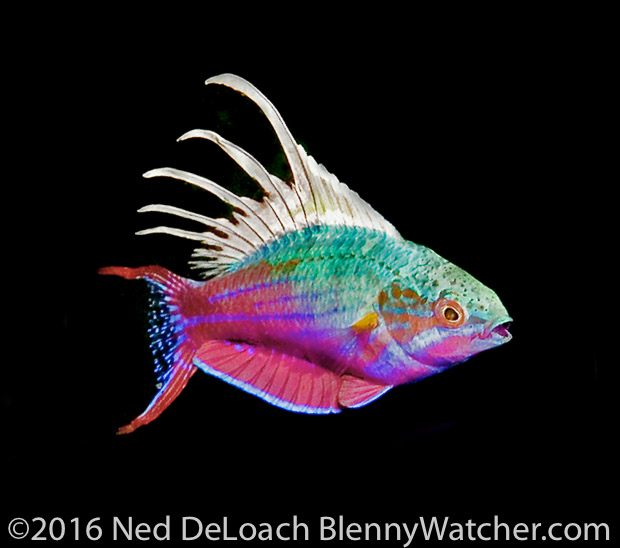 This is one of several hybrid flashers we were able to sort out from the swirling cloud of fins. It is common for these frenzied, 15- to-20 minutes spawning events to include multiple species of flashers, with in most cases, a scattering of unrelated fishes mixed in. Mass spawning in restricted areas combining closely related species regularly produces hybrids, in this case fertile and able to backcross engendering even more variations:

At intervals during the action multiple flasher species, including both sexes and different growth phases, coalesce into small isolated aggregations, the size of a beach ball: 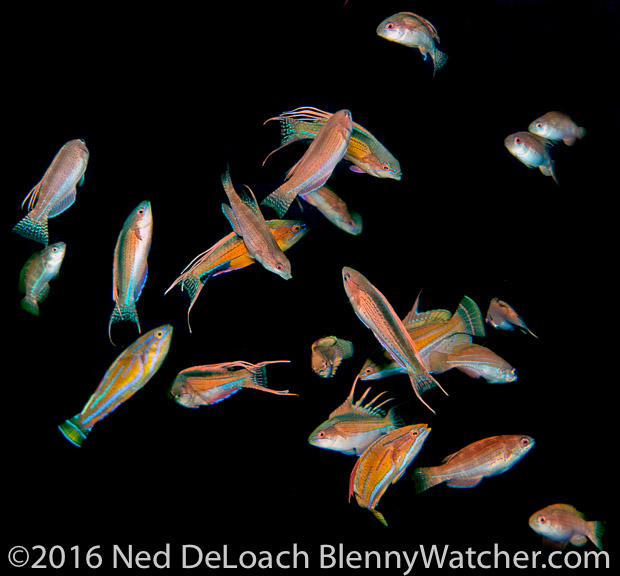 The grand surprise of the Flasher Beach dives were numerous Sailfin Anthias, Rabaulichthys altipinnis, a rare member of the anthias group of the seabass family, known only from the West Papua/Papua New Guinea/Coral Sea region. Four Reef Environmental Education Foundation (REEF) members conducted fish species and abundance surveys on all of our dives in the Bay. At our request they concentrated their efforts on the fish in the approximately 20 by 40 meter area encompassing the spawning aggregation. In roughly one hour, they counted more than 104 species making up the huge cloud including the three regional flashers. Their count for the entire dive site topped 200 species, including an eight-foot zebra shark. Flasher Beach would put a grin on any fish fancier’s face.

Most members of the dartfish family inhabit sand burrows where they disappear in a flash when approach. Zebra Dartfish break the family mold, hanging out in the crescent-shaped undercuts sculpted in the shallows by heavy surge. Every bit as difficult to approach as sand dwellers, Zebra Dartfish disappear into small hiding holes in the porous rock when approached. The only time I could get close is during heavy surge when the fish were feeding in the open. Yan Alfian is first to notice the males occasionally flaring their fins to intimidate rivals. What we couldn’t see until later when we looked at the images were a blue dewlap appearing from a slot beneath the throat at the same time the fins spread:

Two juvenile Longfin Bannerfish appear to morph as they swim past one another: 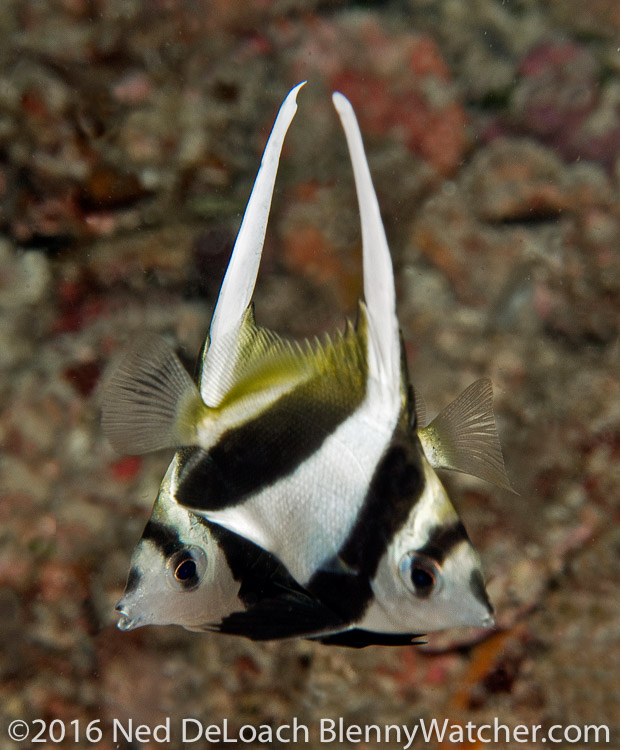 My first sighting of a Harlequin Grouper: The brilliantly patterned ten-inch seabass swims belly up as it crosses the ceiling of a sea cave at 100 feet: 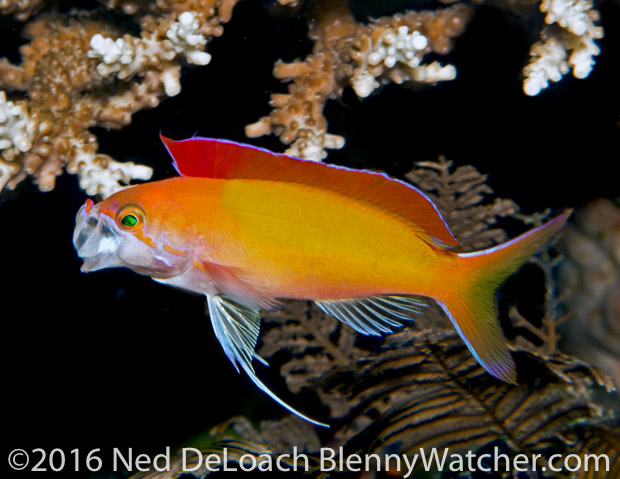 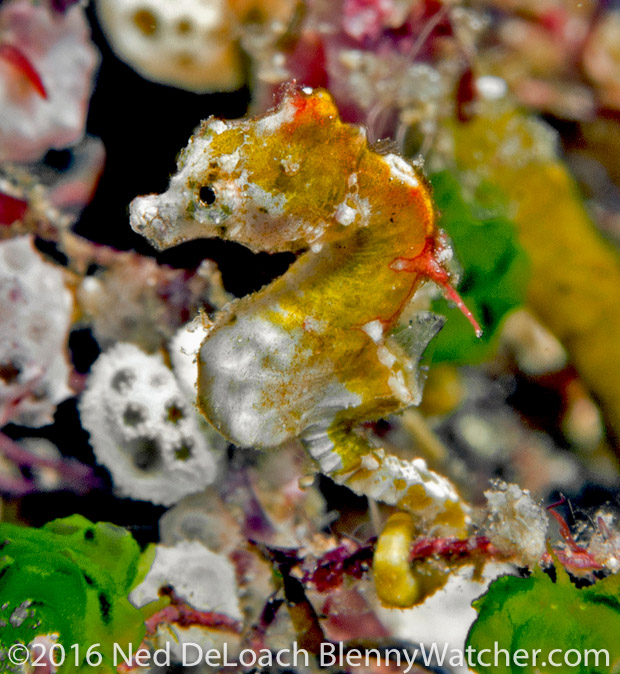 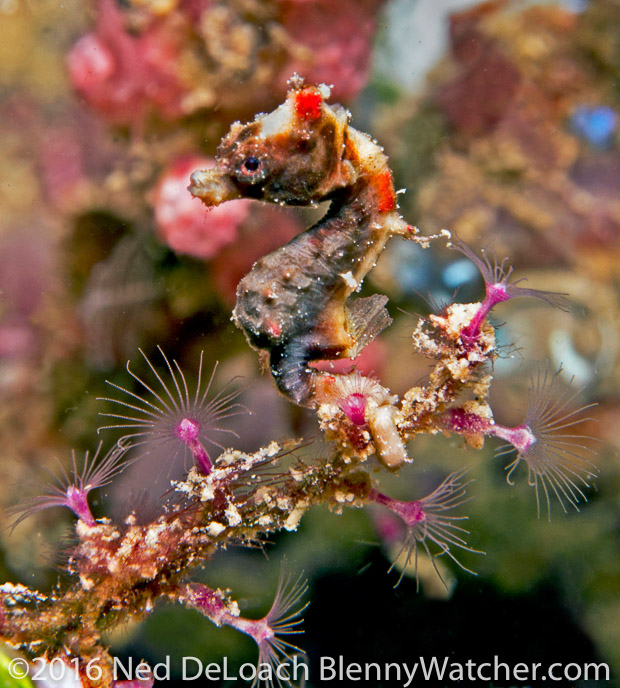 An unidentified cuttlefish slowly extends its feeding tentacle toward a tasty target hiding in the branches of soft coral: 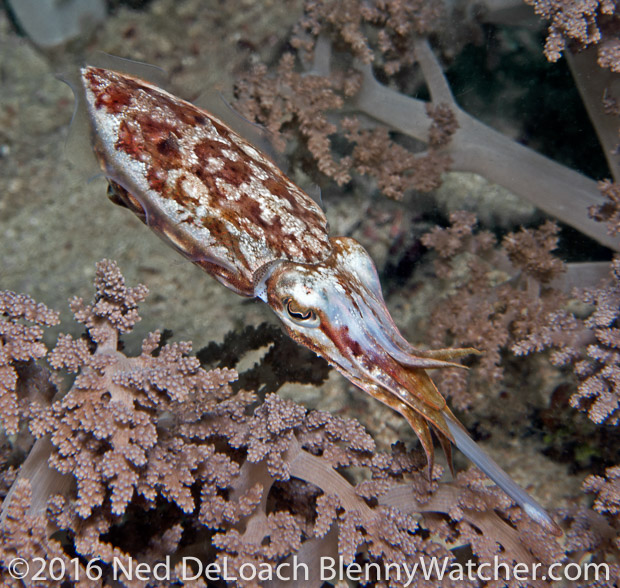 After following the pair of cuttlefish around for twenty minutes they suddenly turned facing one another and mate twice in quick succession: 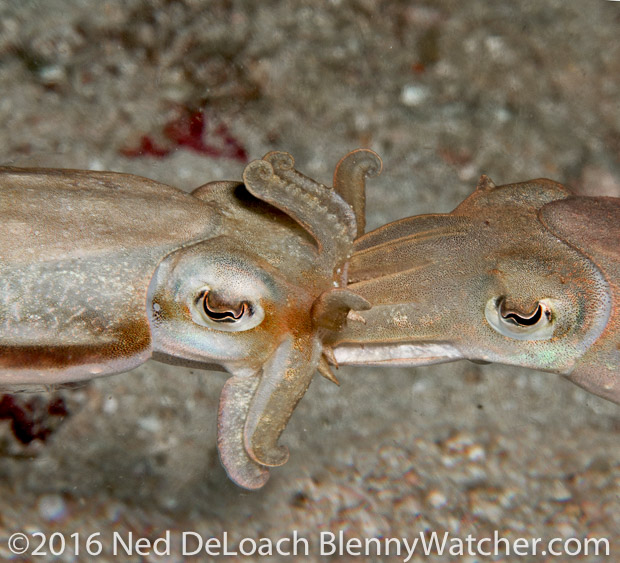 A Leopard Anemone Shrimp has evolved a matching wardrobe for blending in with its symbiotic host: 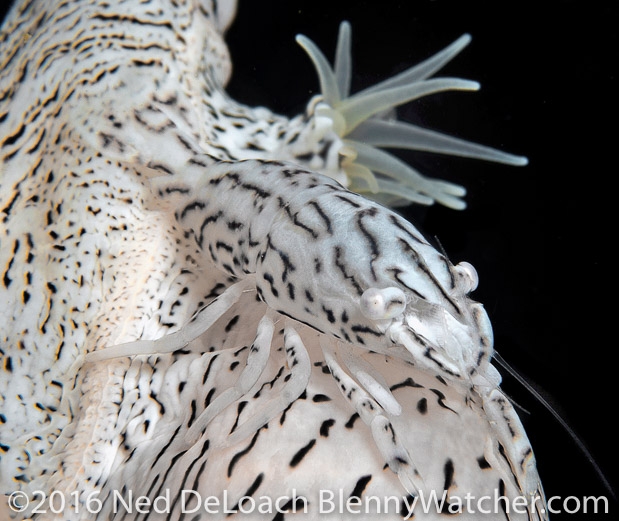 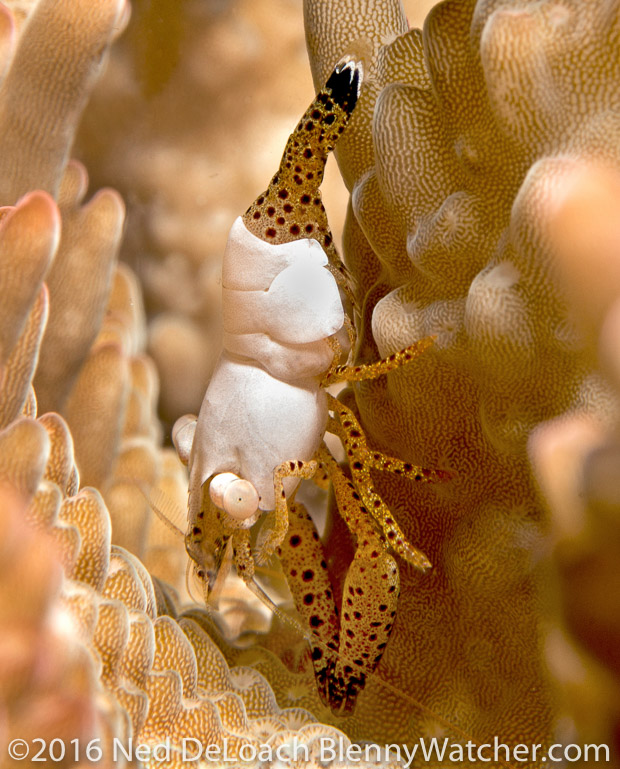 We encounter a Giant Anemone spawning shortly after sunset. Our group also saw brittlestars and starfish spawning and a crab releasing her larvae during the same dive: 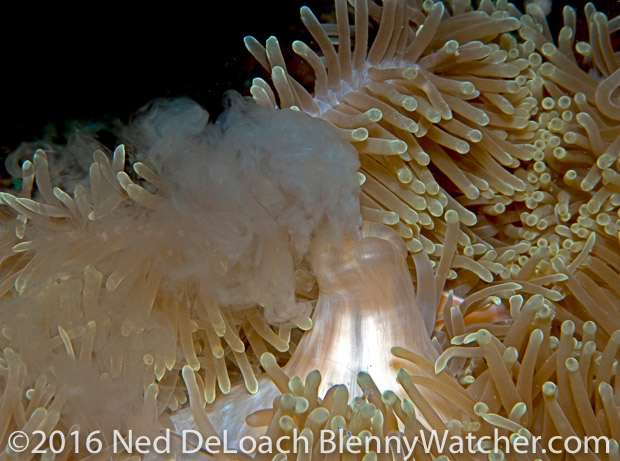