How the Eared Blenny Got Its Name 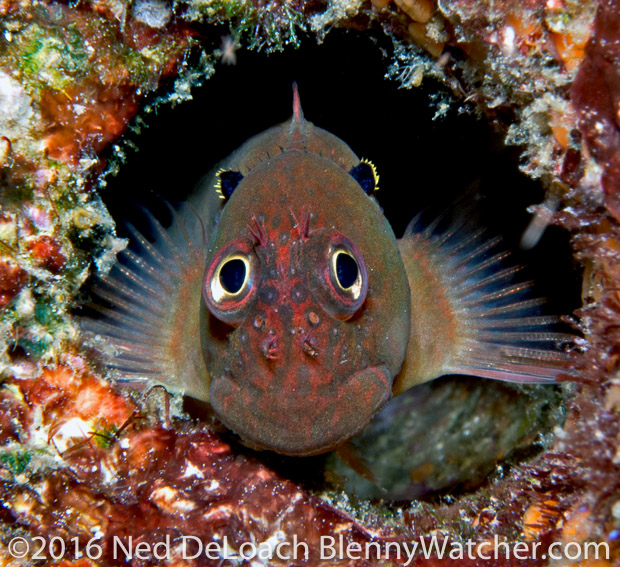 October 2016 ~ Now I know how the Eared Blenny got its name!  I can’t think of a better way to restart the Blenny Watcher Blog than to share one of my favorite blenny pictures of the year, taken by Ned during our April trip to Triton Bay, Indonesia. While scrolling through Ned’s underwater images from this year’s dives, I found this image of an Eared Blenny, Cirripectes auritus.

The Eared Blenny is often described as having a dark spot on each side of its head – indeed, that is usually what it looks like – but close examination (which is difficult because the nervous fish usually dart and hide when approached) reveals that the spots are actually flaps, lined with tiny yellow cirri. Cirripectes auritus was described in 1981 by Dr. Bruce Carlson who explains: “This fish has been named auritus (Latin, meaning “eared”), referring to the earlike nuchal flap on either side of the head.”

The blenny, standing its ground instead of fleeing, enabled me to get a good, head-on look at both of the nuchal flaps – yep – they do look like little ears! I was at the end of my dive, in a heavy surge zone, but I captured enough video to show Ned and Yan why I was so excited. We were fortunate to make our next dive in the same habitat, and we went straight to the shallow shoreline to find another. They weren’t particularly rare, once we had a search image and knew where to look, but it took Ned almost the entire dive to get this shot. It was exactly what I had hoped for.

We’ll be back soon with more from this year’s diving adventures in Bonaire, the Azores and Bermuda. I took an unplanned break from the Blenny Watcher Blog. Many events – family and work – kept me occupied all summer. Thanks for hanging in with us and thanks to those of you who checked on me. All is well. ~ Anna DeLoach