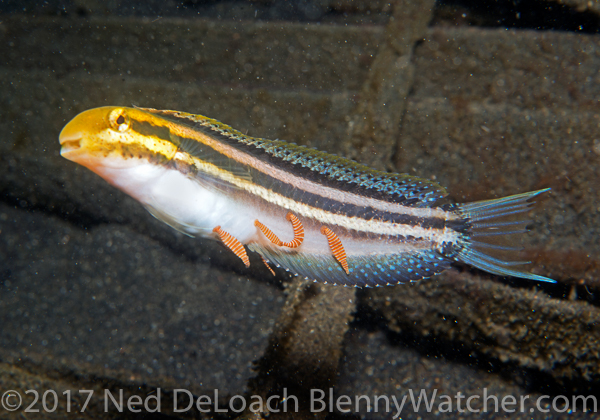 Lembeh Strait, Indonesia ~ March 2018 Oh poor blenny, I saw him peeking out from a palm frond in the black sand muck in Lembeh Strait. From a distance, he looked a little odd, but I didn’t think much of it until my video lights revealed bright orange bits of something hanging off its side. I’ve seen an occasional parasitic copepod hanging onto a blenny, but these were quite different and I needed Ned to get a photo that we could enlarge to get a better look.  Ned and our guide Fendy were just disappearing into the gloom but I managed to make enough noise to get them back over to see the blenny. 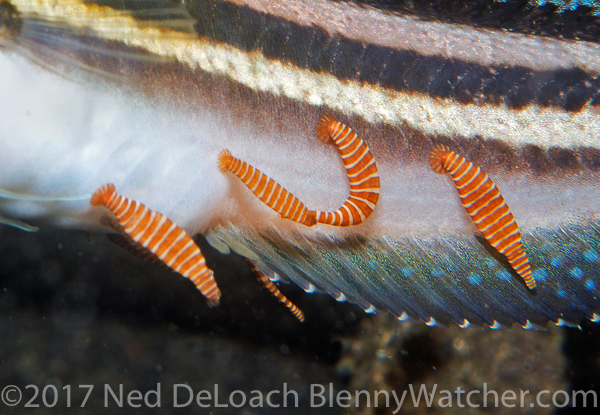 Marine leeches! How cool is that! Although I’ve read about these, I’d never seen them before. The blenny didn’t appear to be bothered by them, going about its business pecking at whatever small things a blenny eats. To my eye, the leeches were just orange, but a close-up photograph reveals how pretty they are.

A quick browse on the Internet turned up, “Marine leeches are a poorly known and rare group of macro ectoparasites” from Reefbuilders. Interestingly, all the examples of infested fish in their article are blennies of the genus Meiacanthus. Our Lembeh blenny is a Shorthead Fangblenny, Petroscirtes breviceps, a species thought to mimic the similar appearing Striped Fangblenny, Meiacanthus grammistes.

Our last post was about a pooping frogfish we saw last October in Lembeh. So why not leeches for our first post from our current trip to the Strait.