Blenny Week took shape over a few après-dive beers - that silly time of day when groups like the Octopus Army are born and a casual mention of Shark Week unleashes a torrent of ideas for spoofs. Ground rules were set: no rehearsals, no retakes. Anyone who wandered into the action was sucked into the vortex. Finding stand-in fish for blennies was a challenge - any Hollywood-type fake-shark builders out there who want to take a shot at building us a working blenny robot - give us a call. Every episode was conceived on a dive trip and thanks to laptops with editing software, was completed in the field (back home, sanity tends to interfere with fun).  Joanne Kidd applied her graphic designer magic to the hand drawn logo, paving the way for the animated intro. The resulting Blenny Week videos are available on the Blenny Week YouTube Channel. Stay tuned - work on Season Two is underway.

Day of the Blenny

Day of the Blenny was inspired by an actual incident, captured in photographs by both Ken Marks and Ned DeLoach. The blenny video was shot in 1995 off Bimini and Anna carried it around on her laptop for the past year while the idea brewed... Hmmm...Fish attacks diver, diver survives to tell about it, (slim) photographic evidence makes for a re-enactment - good grief - no one would ever watch a show like that! A rough edit prompted Michael Hofman to add dramatic narration, recorded in the camera room of a Philippines resort. Anna's practice-run interview, complete with wet hair, was declared a "take" (remember the "no practice, no retake" rule). 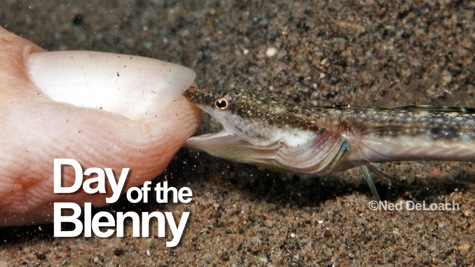 With Day of the Blenny completed, things snowballed. Claire Davies, Andy Gormley and Ned stepped up for an impromptu photo session on the beach; Kathleen Kingston, the only person with a topside camera, snapped a shot and The Blenny Hunters were born - the video was built around that photo. 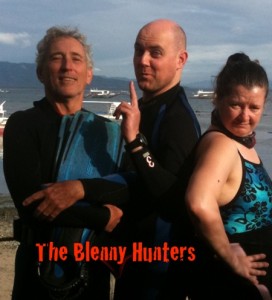 Survivor: Patch Reef was suggested by Ken Marks, who thought the Blenny Channel should advertise upcoming shows. The fact that none of us had ever actually watched the real Survivor show didn't stop us; a quick search of the Internets solved that. It was an easy sell; after all who hasn't wanted to vote someone off the dive boat at some point? None of this video was purpose-shot - it all came from the archives. 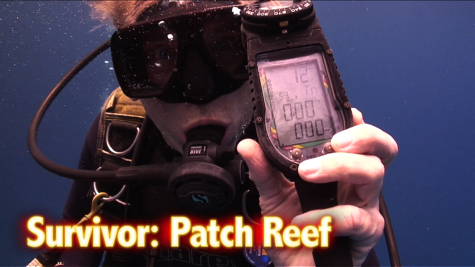 Secrets of the Blenny

During an Octopus Army gathering at Eco Divers Resort Lembeh, a GoPro mini-camera became Blenny Cam and Dr. Wendy, Blenny Vet, who just happened to have veterinary supplies for a later visit to the Tasik Oki Wildlife Rescue Center was persuaded to give up a few for props. Secrets of the Blenny, the most improvised video of the set, was shot in less than 30 minutes during two dives and two topside sessions on the boat. 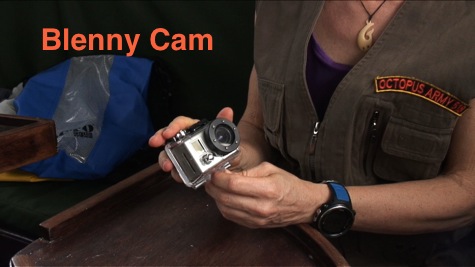 New World Publications and ReefNet have partnered on projects for years but the teams had never dived together until July 2011 in Dominica. The stated goal for the expedition was to survey and catalog fish and invertebrates but the opportunity for the B-Team to participate in Blenny Week was just too good to pass up. Dr. B, the B-team's answer to Mr. T, turned out to be a real sleeper and rumor has it that several new species of blennies were discovered during the trip (for real). 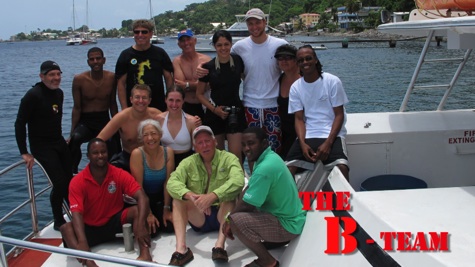 Day of the Blenny

Secrets of the Blenny