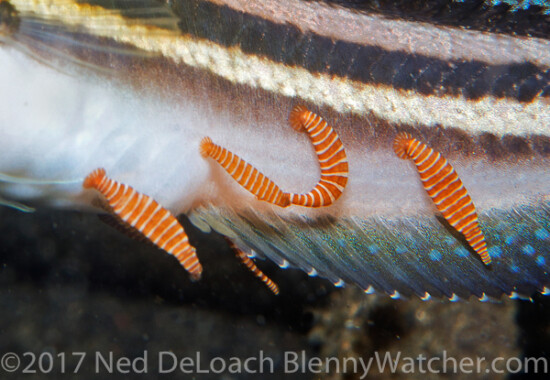 Lembeh Strait, Indonesia ~ March 2018 Oh poor blenny, I saw him peeking out from a palm frond in the black sand muck in Lembeh Strait. From a distance, he looked a little odd, but I didn’t think much of it until my video lights revealed bright orange bits of something hanging off its side. I’ve seen an occasional parasitic copepod hanging onto a blenny, but these were quite different and I needed Ned to get a photo that we … Read more 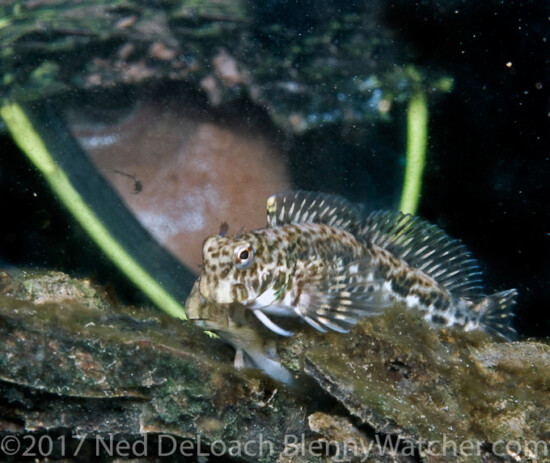 Indonesia, May 2017 ~ Ned and Yan were reluctant blenny hunters for sure. Janet Eyre and I informed them that we were changing the afternoon dive plan. We wanted to skip the reef and have the boat drop us near the shore, at the base of an old lava flow, instead. Janet was surveying fish for REEF and I was hunting for blennies. We were on a roll, having added the Sulu Blenny (Meiacanthus abditus) to our life lists just … Read more 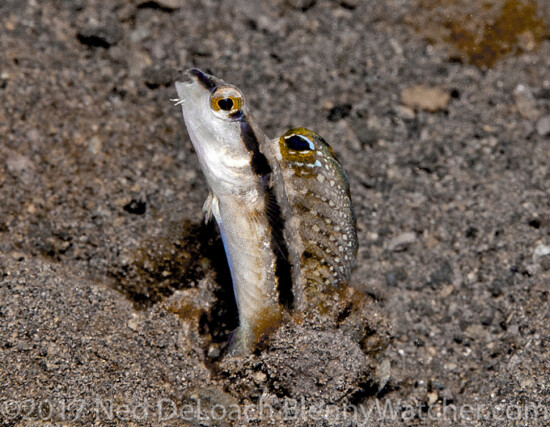 Meet Adelotremus deloachi, a new fangblenny from Indonesia. Named after my husband and co-founder of this blog, Ned DeLoach, who first brought this fish to the attention of scientists in April 2012. It is only the second species in the genus Adelotremus, a genus that was first described in early 2012 with the discovery of the Red Sea species, Adelotremus leptus.  Adelos comes from Greek for “concealed” and trema for “hole”. Also known as sabertooth blennies, the six fangblenny genera are … Read more

A Blenny for Your Day

April 2017 ~ Happy Friday. Here’s a blenny for your day.  I haven’t been online for a while – work here on the home front has kept us preoccupied, hence the paucity of posts. Plus, I’ve been self-exiled from social media but I guess it’s time to check in and see all the fun I missed. So, back to the blenny… At the end of January, we bounded off to Australia to join friends for five weeks of diving and touring. This … Read more 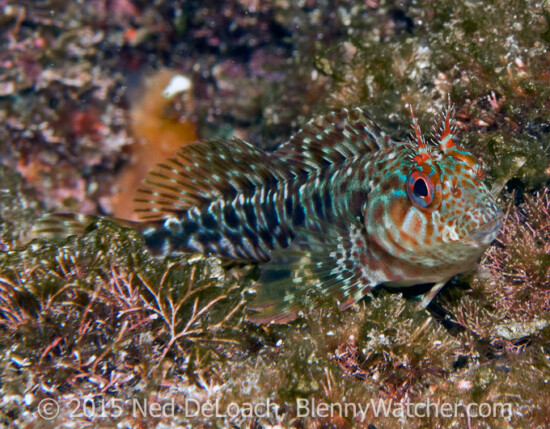 BlennyWatcher’s 2016 Review: We didn’t post as much here last year as we would have liked though as diving goes, 2016 was a pretty good year. We added quite a few species to our life lists (including a blenny or two) and in our continued commitment to making at least one dive trip a year that is out of our comfort zone, we ventured into the cold water in the Azores. That led to a new experience – dry suit … Read more 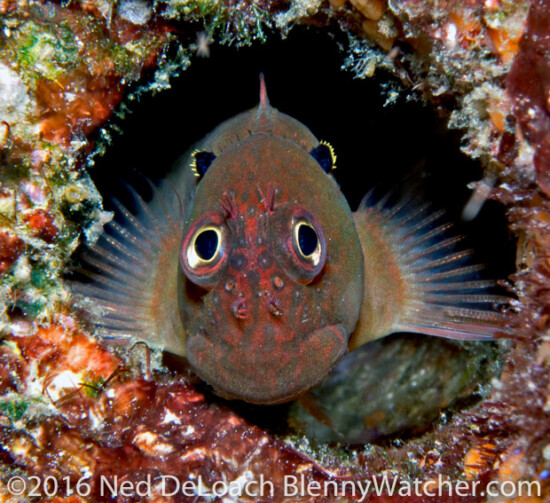 How the Eared Blenny Got Its Name

October 2016 ~ Now I know how the Eared Blenny got its name!  I can’t think of a better way to restart the Blenny Watcher Blog than to share one of my favorite blenny pictures of the year, taken by Ned during our April trip to Triton Bay, Indonesia. While scrolling through Ned’s underwater images from this year’s dives, I found this image of an Eared Blenny, Cirripectes auritus. The Eared Blenny is often described as having a dark spot on … Read more 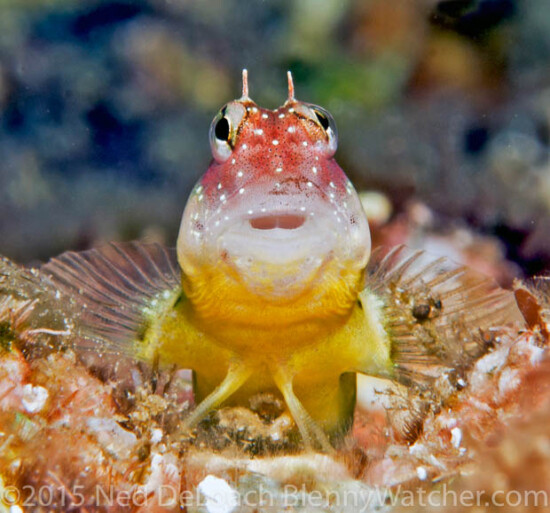 Indonesia, October 2015 ~ Here is our latest Raja Ampat Blenny Portfolio. We just returned from a dive trip aboard the Dewi Nusantara in Raja Ampat in eastern Indonesia, where we photographed some old favorites and added a few species to our life lists, like the very cool Throatspot Blenny, Nannosalarias nativitatus (above) and the Spotted and Barred Blenny, Mimoblennius atrocinctus (below). These blennies like areas of high current and/or surge and we found them at depths ranging from 3 … Read more 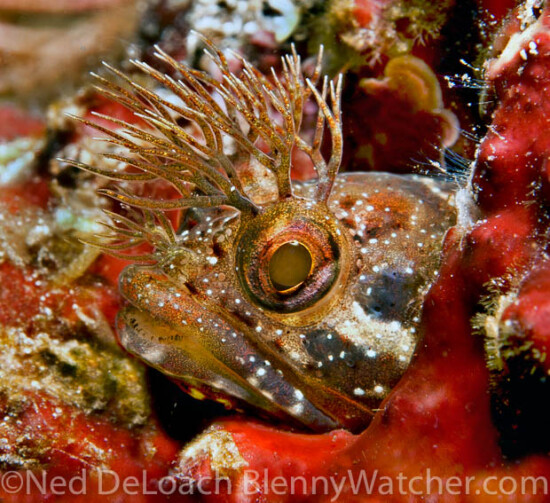 July, 2015 ~ Two years ago, our good friend, Dr. Richard Smith (Ocean Realm Images), showed us photos that he took while diving in Japan. The Pinecone fish, a blenny (ginpo) and undescribed Japanese pygmy seahorse (Japa-pigu), caught our imaginations and Ned and I decided then and there that we had to see these fishes for ourselves. Richard kindly set up an entire three-week itinerary for five of us and off we went last month for a dive trip unlike … Read more 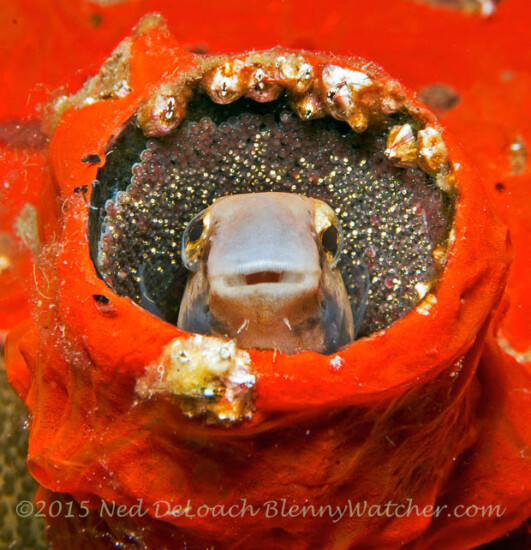 Dumaguete, Philippines ~ April 2015  A blenny guarding eggs! The last time I spent a dive watching a male blenny guarding a cache of eggs, was in freezing water with 3 feet of vis – in Florida, of all places! Since that dive (see Blenny Fever), I’ve seen quite a few different species of blenny spawn but their eggs are difficult or impossible to see because they tend to lay them in abandoned worm tubes, shells or crevices. I think this … Read more 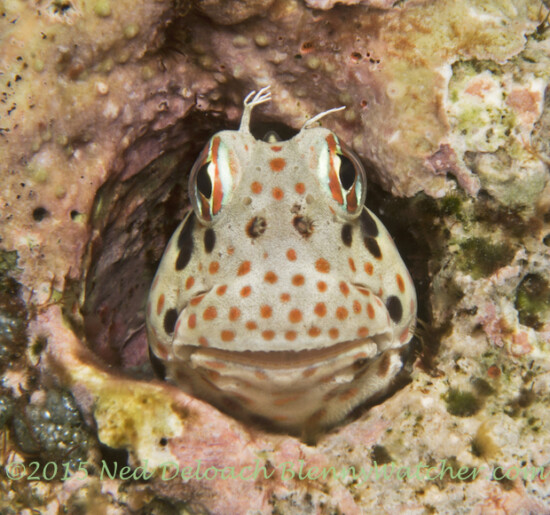 In March, we visited Fiji for the first time since 2005 – ten years – I can’t believe it had been that long! This pretty much made Fiji “new” hunting grounds for me because our last visit was long before the launch of this blog and my quest to see as many blennies as possible. I didn’t see everything I wanted during a week at Lalati Resort and a second week aboard the Nai’a liveaboard dive boat – the Lady … Read more