Hermit in a Bottle 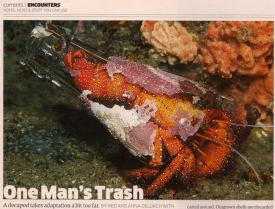 Indonesia, 2006 – I have never been fond of night diving – it is dark down there and I spook easily. Our work on the Tropical Pacific invertebrate book was a challenge for me because so many of the cryptic creatures we were hunting come out at night to feed. I was a reluctant night diver but I made it through the four years of fieldwork, often making two dives a night for four weeks at a time.

Hermit crabs may be seen day or night, but I definitely saw more during night dives. Following them around yielded some interesting and sometimes amusing video. The hermit crab has evolved to live inside gastropod shells. Its soft abdomen wraps tightly around the shell’s coiled internal apex allowing it to be held securely and carted around. As the crab grows, it outgrows its shell home and exchanges it for a larger home.

Watching a crab change shells was high on my wish list and I was always on the lookout for it. On a night dive in Lembeh Strait, we saw something even better. I was off by myself, trying not to annoy everyone else with my super bright video lights (good for scaredy-cats but they ruin the ambiance for people who love night dives) when our guide Liberty came flying over, gesturing for me to follow quickly. Wendy McIlroy, a.k.a. Blenny Vet, had found a Whitespotted Hermit (Dardanus megistos) that decided the end of a broken pop bottle was a good fit. The straight bottle lacked the spiral of a shell so the crab had trouble gaining traction but it gave us an excellent view of the parts of the hermit crab that we would never see otherwise. Click here to read the article Ned and I wrote about the encounter in Scuba Diving Magazine. 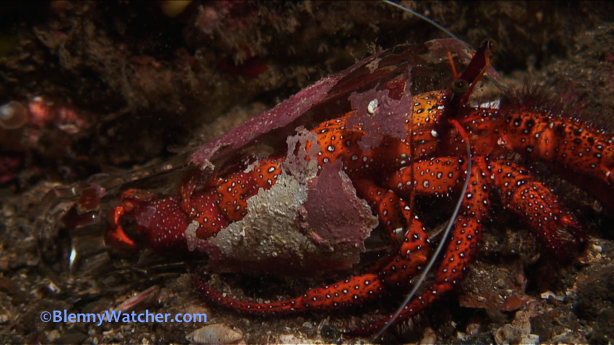 The following month I finally got my wish on a night dive in Banda Harbor, Indonesia. Our friend Eduardo called me over to see a Whitespotted Hermit Crab examining an empty shell. The examination and selection of a new shell can be a drawn-out affair. I don’t know how long it had been there before we arrived but we watched for over 15 minutes before the crab finally made the switch to the new shell. It decided immediately that it wanted its old home back and had to chase it down the slope to retrieve it. How lucky to see not one, but two shell exchanges!

While I am still not wild about night diving, it is much more tolerable now that I have seen things that I would never have seen during the day. Here’s the video of both hermit crab observations: