I See You, Wonderpus!

We followed the Wonderpus octopus (Wunderpus photogenicus) for most of our hour-long dive. Occasionally it would disappear down an impossibly small hole and emerge a few minutes later. Was it was after prey or trying to elude us? We suspected prey because it didn’t seem very concerned by our presence. In my video, (at the end of this post) a shrimp goby attacks the octopus as it approaches the goby’s burrow. The octopus was undeterred and emerged from the goby’s hole a few minutes later but we couldn’t tell if it actually ate the goby’s symbiotic shrimp. 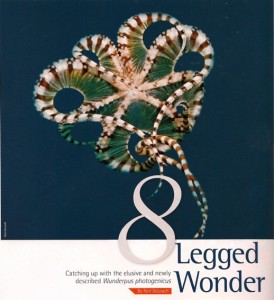 The experience is documented in an article that we wrote for an early 2009 issue of Scuba Diver AustralAsia. We also talk a little about what goes into the process of naming a species. The complete scanned article is here: 8-Legged Wonder. It includes Ned’s cool photo of a Wonderpus holding a snapping shrimp (bonus: the Wonderpus is also carrying eggs!)