Ambon Indonesia, April 2011 – Dark, murky water; volcanic rubble; no coral – we have been working our way to this site since the start of our dive cruise that began near Batanta, Indonesia two weeks ago. The areas we visit so far have stunningly beautiful coral reefs – full of fish, but the critter hunter in me unapologetically waits for my real target: Ambon’s Laha Pier, a.k.a., the Twilight Zone. This site has been serving up exotic critters since Burt Jones and Maurine Shimlock first dived it many years ago with good friend, the late Larry Smith.

Once our boat anchors, there is just enough light to make a dive. Out of the drab, blue-gray of the late afternoon, colorful creatures appear, some so vivid that our artificial dive lights are barely necessary. Harlequin Shrimp (Hymenocera elegans), normally so rarely seen that we can count previous encounters on one hand, are spotted at least four times in the first half hour. These shrimp feed on sea stars, flipping them over onto their backs to render them helpless, while they sever and consume the arms, one at a time.

Fire urchins, so named for the painful sting rendered if one is foolish or careless enough to touch them are scattered as far as we can see. The most colorful, the Variable Fire Urchin (Asthenosoma varium), is sometimes host to commensal Coleman Shrimp (Periclmenes colmani). Here, at least every sixth or seventh urchin harbors the shrimp. The shrimp move in and around the spines, not always immediately visible to the observer, but it is pretty easy to spot an inhabited urchin by the telltale bare spot, nipped clean by the shrimp.

Nudibranchs (nudi=naked, branch=gill) or seas slugs, are plentiful. One nudibranch of particular interest, an undescribed species from the genus Janolus, makes a quick appearance and before I can show it to Ned, disappears back into the rocks. We see many amazing and rare sights during our week in Ambon, but that very first dive, remains the most memorable. 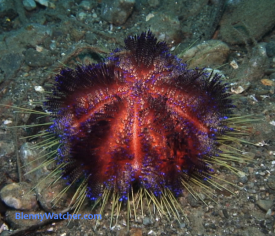