A few months ago I posted about Carry Crabs, little crabs of the family Dorippidae that have modified back legs that they use to grip things, living or inanimate, to disguise themselves. Carry Crabs don’t appear to be fussy – one of the first I ever saw was carrying a live nudibranch. Anyway, my Carry Crab post included this screen capture of a crab toting an unlucky sea pen and I have to say that I think being uprooted and hauled around as camouflage by some upstart crab has to be the ultimate insult (video at the end of this post).

While looking at that video, I also ran across some of another sea pen under siege by hungry Armina nudibranchs  That was interesting because the sea pen seemed to uproot itself and start rolling, presumably to escape from the onslaught. I decided to read up a little about sea pens.

Sea Pens, a.k.a., Sea Feathers, are octocorals in the order Pennatulacea. Octocorals are made up of colonial polyps and in the case of the sea pen, the polyps are specialized, for example, the primary polyp develops into the stalk with a bulbous holdfast or root that it buries to anchor it into the soft bottom. If you want a good overview of sea pens, check out the PLOS One open access publication, “The Global Diversity of Sea Pens (Cnidaria: Octocorallia: Pennatulacea)” by Gary Williams, where you can read all about their distribution and read some interesting historical accounts about their natural history. There, I also learned that they are bioluminescent and that the Romans referred to them as “Mentula alata” (winged penis) – always good to know things like this for dive boat chitchat. 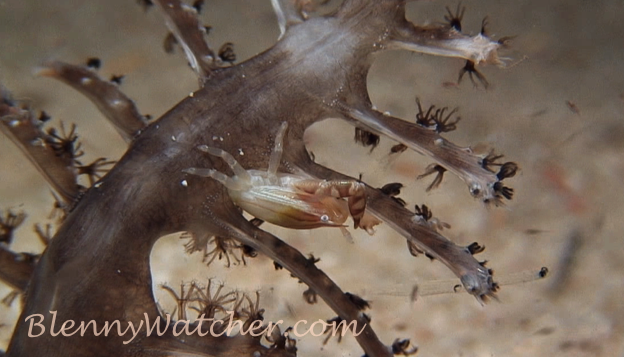 I plead guilty to giving sea pens no more than a passing glance to look for little crabs and shrimp that live symbiotically with some of them, but intend to spend more time looking at them on my next dives. Here, posted to our YouTube BlennyWatcher Channel, is my collection of sea pen observations, including some spawning: