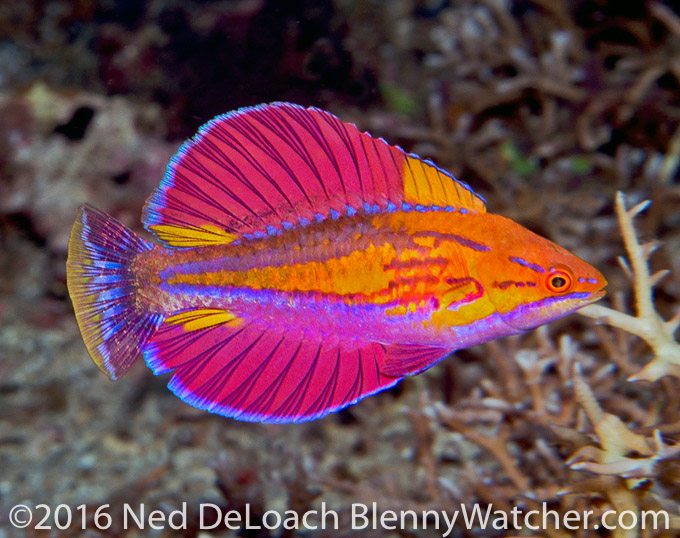 Finding a stunningly beautiful fish previously unknown to science is exciting enough but the absolute thrill for me is that the name, Paracheilinus alfiani, honors our good friend and dive guide, Rahmad “Yan” Alfian. Yan was with us on the dive that I first saw the fish and I can still hear his “Ohhhh…” when he arrived on the scene and I pointed out the object of all my excitement.

Reflecting back, I realize how easily this fish could have been missed. We dived near this site off Lembata (Kawula), Indonesia five years ago aboard the Komodo Dancer and found the black sand bottom interesting but not remarkable. This cruise, aboard the Dewi Nusantara, we made two dives on the same black sand slope then moved north to visit the active volcano on Komba Island before steaming to Maumere to pick up a new group of divers. In planning our itinerary for the second trip, cruise director Wendy Brown decided that the travel schedule would work better if we spent the entire day diving off Lembata. We had already dived the black sand slope multiple times so for the third dive of the day, she suggested exploring a site a little farther down the coast.

Our dive day aboard the Dewi Nusantara normally starts at 7:30 a.m., but the long steam out of Maumere pushed our start to 9:30, making the start of the third dive close to 4:30 in the afternoon. On a normal dive schedule, we are usually getting out of the water at 4:30 instead of starting our dive. Late afternoon is my favorite time to dive because many species of fishes court and spawn then. The shallows of this new site were full of beautiful hard corals but Ned and I headed down the slope to check out the sand plain below. While Ned stopped to shoot a jawfish, I wandered on and ran into an interesting low profile reef slope full of flasherwrasses.  It was deep for the third dive of the day (20 meters), but male flasherwrasses do their best flashing in the late afternoon while they are courting females, so I wasn’t going to miss a chance to film them.

I saw the fish and knew instantly that this was a “new” flasher. Then the dilemma: shoot video in the limited bottom time that I had at 20 meters or go back and find Ned. I shot a few seconds then came to my senses (a photographic record is much more important than my video) and started wiggling the very loud and squeaky arm of my video light. That annoying sound is a signal that Ned, Yan and most of my dive buddies are conditioned to recognize as my call to come and come quickly. Ned finally showed up, followed a few minutes later by Yan, with our good friend Dave Dempsey in tow. The four of us spent the remaining 20 minutes of our bottom time with these gorgeous flasherwrasses.

Back on the boat, we shared our images with Wendy, Dr. Richard Smith and Janet Eyre (a fish expert who had been collecting other species for Gerry and Mark). Through the miracle of cellphone towers in remote places, Richard was able to get a message out to Gerry asking for confirmation that this was indeed a new species and more important, that they had not already collected a specimen.  Although I knew about the recently described Komodo Flasher, P. rennyae, none of us had ever seen one nor did we have a photo of one for comparison. Wendy worked out an alternate itinerary that would allow us to work our way back to the site at the end of the trip to collect the fish, if clearance came back from Gerry and Mark. Word came back: it was not P. rennyae; it was new.

And now, a year and a half later, it has a name: Paracheilinus alfiani, Alfian’s Flasherwrasse. In addition to working as our guide on the Dewi Nusantara, Yan has worked with Gerry Allen on collecting trips and has guided countless divers and underwater photographers throughout Indonesia. He is an enthusiastic student of Indonesian marine life, picking our brains about behavior and species distribution and he’s always ready to jump into our next project. We’re grateful to Gerry Allen and Mark Erdmann for bestowing this honor on Yan. And you know what is really cool? May 8th, the day I first saw the fish, is Yan’s birthday!

If you are interested in flasherwrasses, we encourage you to read this informative review of the genus, published this week in the open access Journal of the Ocean Science Foundation (JOSF): http://www.oceansciencefoundation.org/josf19b.html

The video below was shot in low light conditions, but you’ll be able to see the wrasse in both its normal state and in full display. Near the end is one clip with load of flashers, including some hybrids: